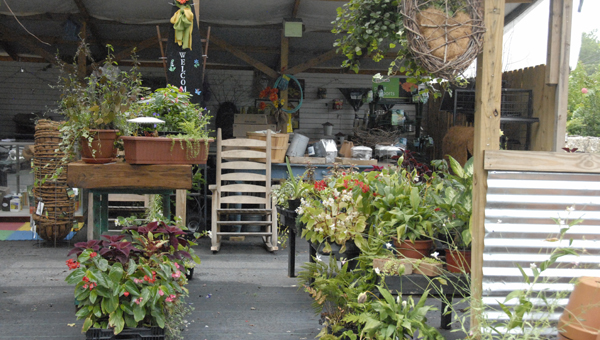 Ruth and Don Driggers have been running Vincent Gardens for the past seven years, selling anything from bedding plants up to large trees and honey. (Reporter Photo / Jessa Pease)

VINCENT— Don and Ruth Driggers didn’t start out as gardeners. In fact, almost none of their professional careers had anything to do with plants. Don spent 37 years in aviation and Ruth spent 15 years in the medical field with an additional 10 years in real estate.

It’s a different story for them now. The retired couple is seven years deep in what started as a small plant shop called Vincent Gardens. Over the years, the business has expanded, adding a side bee business and various fundraising projects, but you can still find them out at 42374 Alabama 25 during the day.

“Our plans were to open up a little garden shop right here on Thursday, Friday and Saturday,” Don said. “It would be just in the afternoons and that kind of stuff. That went to seven days a week and 14 hours a day. It’s blossomed and it’s done well.”

The garden draws people from all over Shelby County and travelers on the way to Lake Logan Martin. Ruth said they grow all kinds of plants from bedding plants up to large trees, and they also have about 300 varieties of native Alabama plants.

“One of my favorite things to do is to put arrangements together, and then I started fooling around with the fairy garden thing,” Ruth said.

Both Ruth and Don went through the master gardener program in Shelby County, giving them an edge in the plant business. The couple said they try to educate people about plants, so Ruth teaches classes on potting and arrangement and Don illustrates hydroponic growing and pruning.

Spring and fall are the big seasons for plants, but they do grow some things during the winter. Ruth said they begin in late winter to keep up with the demand because they also grow plants for sales at Aldridge Gardens and garden clubs in six counties.

As plants are a seasonal thing, Ruth and Don also sell honey, from hives Don manages himself, and 19 varieties of candied pecans.  Don started beekeeping about four years ago, after his friend Carlton Bearden, 93, asked if he could keep a hive at Vincent Gardens.

“Mr. Carlton taught me a whole lot. I listened to him and watched him,” Don said. “I just started doing it myself. He’s still my supervisor. He’s always checking on me and making sure I do everything well.”

Don became a member of the Beekeeping Association in Shelby County, attended its school and started his own hive of bees. What started as one box has expanded in 19 beehives.

It’s a supplementary business that Don describes as “a lot of hobby,” explaining that he can be stuck in his beekeeping suit for up to four hours out in the sun.

“It’s really a lot of fun. You go in every week and check out the boxes and take them apart,” Don said. “Then the bees are flying everywhere and you are looking at them making sure they are healthy.”

If creating a garden business and expanding into pecans and honey wasn’t enough, the Driggers also love to give back to children. They partnered with Vincent and Chelsea High School, among others, and help them find low prices for ferns, mums, poinsettias and pumpkins to use in fundraisers.

The Driggers also worked closely with the HOPE program to get it started. Don and Ruth would go to the schools to visit, and students would visit and work in Vincent Gardens. Don said it was rewarding to see those kids transplant plants or put a seed in the ground and say, “Wow, I did that.”

“Everything has been fun. I wouldn’t say one thing is better than the other,” Don said. “I love working with those kids and we both love the fundraiser aspect of it. We are very passionate about what we are doing.”