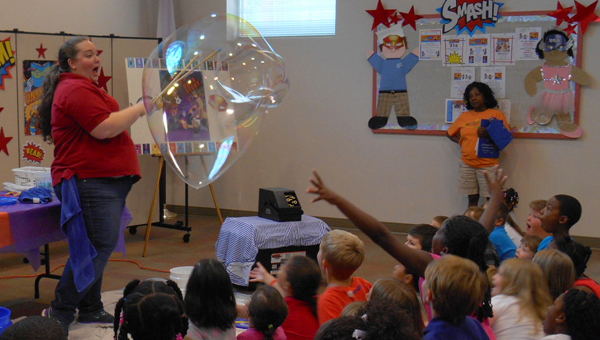 The science of bubbles was revealed during Lights, Action, Bubbles with Miss Kit at the Albert L. Scott Library in Alabaster this summer. (Contributed)

A Summer Challenge of heroes and readingis over for 670 children who participated in our six-week program.

Under the theme of heroes, kids set goals, checked out and read books and earned prizes and certificates.

Our Super Readers’ Wall of Fame recognized kids who read at least five books. Besides story times, youngsters enjoyed many other activities.

Iron Giant Percussion entertained and educated. Kids made instruments and played with the band creating the audio simulation of a storm.

Dogs, a potbellied pig and clowns amused from Skin and Bones Comedy Circus.

Laughing and dancing ensued when Mark Seymour of Be-at Your Best Drums performed with international instruments.

The science of bubbles was revealed during Lights, Action, Bubbles with Miss Kit. Critter fans learned about animal ‘super powers’ from educators and animals from the Alabama 4-H Center.

Tweens and teens launched their challenge during Unmasked! Uncover the Secrets of Magic with magician Tommy Johns.

During craft sessions, teens decorated masks and learned to make potato stamps. They went on a Culinary Quest taking part in an Iron Chef-inspired competition, as well.

During American Girls Save the Day, girls read and discussed Addy Saves the Day and had fun with dolls, crafts and games.

The challenge ended in mid-July with our Super Finale.

She sang A Spoonful of Sugar and taught everyone to spell ‘supercalifragilisticexpialidocious’ with their bodies.

Drawings were held for a bicycle, a Kindle Fire and more.

The goal of the challenge was to inspire kids to read when not in school.

Adults had fun with our Book-in-a-Jar Contest.

The winners, Rebekah Lauppe and Lindsey Irvin, each won a $25 MasterCard gift card.