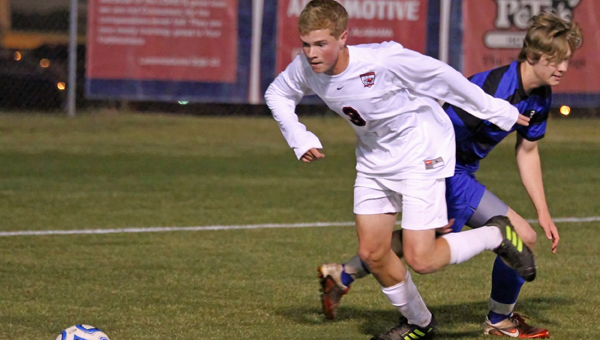 Hunter Holstad was one of three players from Shelby County to be nominated to play in the North-South All Star game, held in Montgomery on July 21. (Contributed)

Phildon Dublin, Hunter Holstad and Anthony Pack represented Shelby County at the North-South boys soccer All Star game on July 21. Dublin, a goalkeeper from Helena, was named the MVP of the game as he recorded two saves against the South to preserve a 0-0 tie. Pack, from Indian Springs, did not participate in the contest due to an illness but Holstad, from Oak Mountain, started and played the entire game. All three were chosen to represent the North, and all three made the All-County list as well.

Holstad played an integral role in helping his Eagles team capture the 7A state championship, and will undoubtedly be one of the leaders on a loaded 2016 team. He found out he was chosen to participate in the game at the tail end of the season.

“I found out before the state finals,” Holstad said. “My coach told me I had made the All Star game. I was pretty excited about it because one of the seniors from our team this year (Clay McDonald) made it last year and said he had a blast doing it.”

The game itself was something of a slog, because the players had minimal time to practice and get comfortable, so the early stages of the game were tough as the players tried to figure each other out.

“It was a little difficult at first, we didn’t really know each other,” Holstad said. Throughout the game it got better, we adjusted well.”

The nomination also came with the opportunity to work with the local Montgomery YMCA and teach kids about the game of soccer, which Holstad said is the element of the experience he will remember the most.

“A few of the kids we mentored hadn’t ever touched a ball before,” Holstad said. “We got to introduce them to soccer, which was a lot of fun.”

By BAKER ELLIS / Sports Editor MONTGOMERY – When Chris Love was first approached with the opportunity to coach in... read more