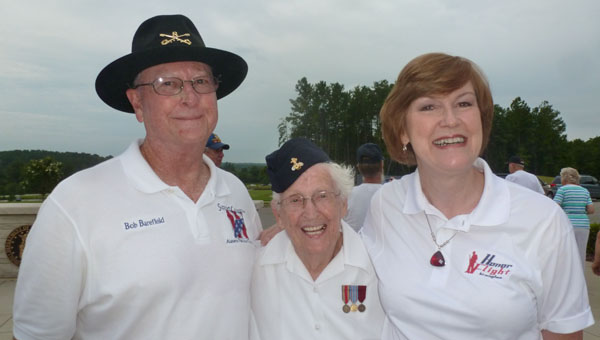 Col. Bob Barefield, U.S. Army (retired) and chairman of the Support Committee of the Alabama National Cemetery is co chair of the Keep the Spirit of ’45 Alive on Aug. 8. WWII Wave Frances Phelps will give the invocation and Honor Flight Birmingham Director Pam Nichols will be Master of Ceremonies. Pictured are Barefield, Phelps and Nichols. (Contributed)

The public is invited to the sixth annual “Keep the Spirit of ’45 Alive” on Saturday, Aug. 8 at 6:30 p.m. at the Alabama National Cemetery on Highway 119, Montevallo, Ala.

Spirit of ’45 is a nationwide tribute to remember the “Greatest Generation,” those men and women who served and fought in World War II, the most widespread and deadliest war in history.

From 1939-1945, over 100,000 million lives in 30 countries were directly affected, approximately 11 million people were murdered in the Holocaust, and between 50-85 million were killed in the six-year world war.

For the last six years Bob Barefield, chairman of the Support Committee of the Alabama National Cemetery, and Gene Ramsey, Alabama director of Bugles Across America, have sponsored the patriotic event at the cemetery along with coinciding programs nationwide to honor WWII veterans.

Across the country in every time zone, TAPS are played at 7 p.m. with the last played at Pearl Harbor.

The day will begin with an Honor Flight Birmingham Reunion chaired by Honor Flight Co-Director Pam Nichols at the Ballroom/Constitution Hall at American Village from 4:30-5:30 p.m. on Highway 119 in Montevallo.

All past Honor Flight Birmingham veterans, guardians and volunteers and donors are invited for a light supper.

The Daughters of the American Revolution will help serve.

Nichols will be master of ceremonies; WWII WAVE Frances Phelps will lead the invocation followed by the Iwo Jim re-enactment by the Howlin’ Mad Detachment, Marine Corps League.

The public is invited to a Harper Lee Celebration to celebrate the release of Lee’s sequel “Go Set a Watchman”... read more