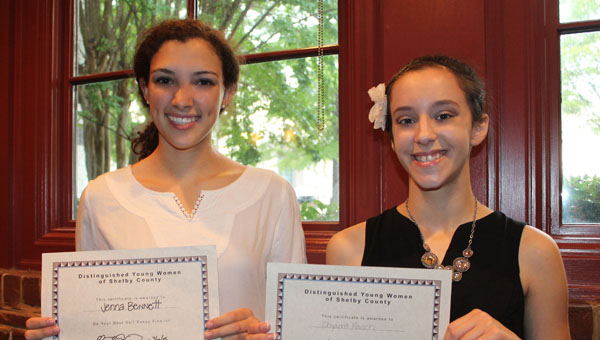 “‘Success is not final, failure is not fatal: it is the courage to continue that counts.’ This quote by Winston Churchill is a reflection of my daily attitude towards life,” said Pelham High School Senior Jenna Bennett in her Be Your Best Self Essay that earned Bennett $500 and the distinction of the Shelby County Distinguished Young Women 2016 Essay Competition Winner.

Distinguished Young Women is the scholarship competition that was once known as Junior Miss.

This scholarship competition for young women is based on academics, accomplishments, talent and many other factors.

Students may compete in Distinguished Young Women during the summer between their junior and senior years of high school.

Chyanna Rausch, also a Pelham High School senior in this competition, was the winner of a scholarship for the self-expression portion of the competition.

During the self-expression portion of the competition, each girl speaks briefly about a cause she feels passionately about.

“I talked about Eating Disorder Awareness,” said Rausch. “Being on the debate team, and singing at church prepared me for that speech because I didn’t have any stage fright. We also received a lot of help from the leaders at rehearsals. All of the DYW volunteers really pushed us to be our best selves!”

In addition to being on the Debate Team, Rausch is also involved with the PHS Broadcast program. Bennett is on the PHS tennis team and also serves as the Senior Class President.

“The best part of the competition was meeting 18 other distinguished women and the friendships that I built during the week,” Bennett said. “I have never had a class with Chyanna before. Even though we both go to PHS, Chyanna and I became friends through DYW.”

“DYW prepared me for my future by building my confidence,” said Rausch.

Rausch and Bennett’s speaking and writing awards prove they have the communication skills to insure their future success in every endeavor.

The courage to communicate empowers Pelham’s Distinguished Young Women—and every other person who finds that courage also.