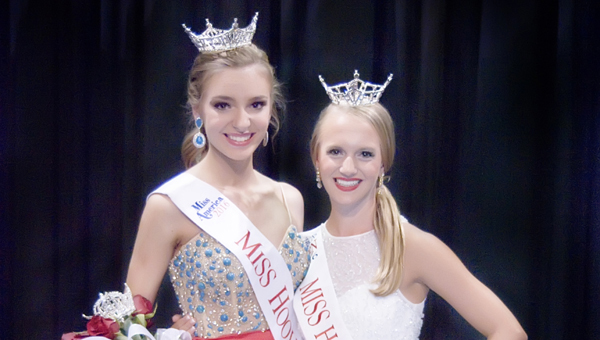 HOOVER—A new Miss Hoover has been crowned. Callie Walker, a freshman at the University of Alabama, was crowned Miss Hoover 2016 at the 2016 Miss Hoover Scholarship Pageant on July 11.

Contestants from across the state traveled to Hoover High School to compete for a total prize package worth $15,860.

In addition to being crowned Miss Hoover 2016, Walker received the Talent Award and earned cash scholarships of $5,075 to further her education.

For her talent, Walker performed a ballet en pointe to “The Hoedown” from the classical ballet, “Rodeo.” Her personal platform is “Be a Game Changer: Empowering Youth to Volunteer.”

First runner up was Hayley Barber, Jessica Proctor was named second runner up, Megan Smith took third runner up and Chassidy Sumler came in as fourth runner up.

Lindsay Fincher was crowned Miss Hoover’s Outstanding Teen 2016. For her talent portion, Fincher performed a musical theater dance to “Buenos Aires.” Her personal platform is “Stand Tall: Adolescent Scoliosis Screening,” inspired by her own struggle with the disease.

Fincher will advance to represent Hoover at the 2016 Miss Alabama’s Outstanding Teen Pageant, the teen counterpart to the Miss Alabama Pageant.

Sydney Slaughter was named first runner up, Caitlyn McTier came in as second runner up, third runner up went to Kyra Callens and Katelyn Richard took fourth runner up.

Both the Miss Hoover and Miss Hoover’s Outstanding Teen pageants were directed by Bragg Scroggins and Keith Brashier.

“We are thrilled to bring back the Miss Hoover Pageant and implement the Miss Hoover Outstanding Teen Pageant,” Scroggins said. “The city of Hoover deserves representation at Miss Alabama. This was all made possible by the generous contribution of City Councilman Gene Smith and his wife, Pam Smith. Without their financial support, these pageants would not have been possible.”

“The miss Alabama Pageant provides tens of thousands of dollars in scholarships to contestants. It is an amazing program that allows contestants to pay their college tuition and pursue opportunities that otherwise would not be possible,” Brashier added.

Pictured is one of the newly constructed bridges at Helena’s Joe Tucker Park. The bridges were replaced after the Helena... read more