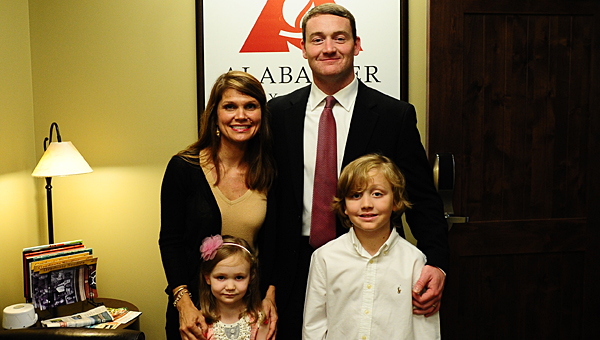 ALABASTER – The former principal of Thompson Sixth Grade Center will return to Alabaster to lead Thompson High School after a two-year tenure as the principal at Montevallo High School.

During a special-called meeting on July 28, the Alabaster Board of Education voted unanimously to hire Dr. Wesley Hester as the new principal at THS. Hester was the principal at TSGC during the 2012-2013 school year, and was hired as the MHS principal in July 2013 as Alabaster schools broke away from the Shelby County School System.

Hester was chosen from a pool of about 35 applicants for the vacant THS principal position, and came after an “extensive interview process,” Alabaster School Superintendent Dr. Wayne Vickers said.

“With me, you will get a relentless pursuit of excellence, of perfection. We may never reach perfection, but it’s something we are going to strive for,” Hester told board members after he was hired. “I’m blessed to be part of such a wonder team and school system. I’m happy to serve the students here and make an impact on all the lives in Alabaster.”

Hester said he has worked out a transition plan to move from MHS to THS over the next several weeks, and said he is planning to ensure both schools see a successful start to the 2015-2016 year.

“With this being a crucial time of year with the beginning of school, I want to make sure we’re ready here while also making sure Montevallo has a smooth start to the year,” Hester said. “I always strive to leave a place better than I found it.”

“We’re excited that he’s coming back,” said Alabaster School Board President Adam Moseley. “He’s familiar with the city, and he’s familiar with what we want to get done here. I think he will be a great asset.”

Vickers said Hester “is exactly what Thompson needs,” and called Hester a “great educator and a great thinker.”

“He is certainly the type of individual we are fortunate to employ,” Vickers said. “He has a great vision for what Thompson needs.”

Alabaster School Board members praised Hester for his track record, and for his accomplishments at MHS.

“It’s important to have someone who understands the vision going forward, and someone who has a keen sense of direction for the school,” said board member Ty Quarles.

“We are truly blessed to have him back,” said board member Linda Church.