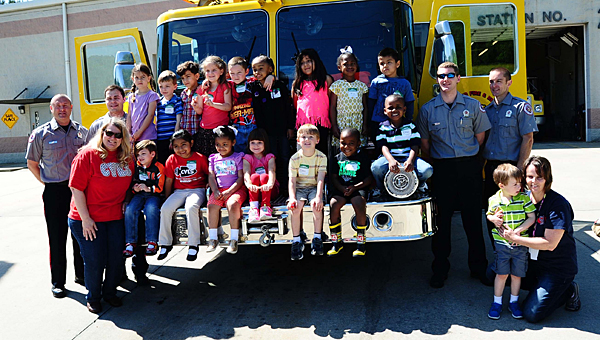 Alabaster pre-K students take a trip to Alabaster Fire Station No. 2 off Butler Road in April. Stations No. 2 and No. 3 soon will see multiple upgrades. (File)

ALABASTER – Two of Alabaster’s fire stations soon will see significant renovations, as the City Council approved more than $32,000 in upgrades during a July 27 meeting.

The council voted unanimously during the meeting to approve up to $32,380 to cover renovations at Alabaster Fire Stations No. 2 and 3, which are off Butler Road and U.S. 31, respectively.

“We knew there would be some issues that would need to be addressed,” Bedsole said.

The projects will replace the heating, ventilation and air conditioning system at Station No. 3, and will include interior remodeling, new flooring and an updated kitchen at Station No. 2.

Alabaster Fire Chief Jim Golden said most of the work will be done in-house by the city’s firefighters.

“A lot of the work is being done by the firefighters in between running calls, so there will be a cost savings there,” Golden said during an interview after the meeting.

Golden said Station No. 2 was constructed in the early 1990s, and has not seen significant renovations since then. Fire Station No. 3 was built in 2001. The renovation projects will begin immediately, he said.

In 2013, the city conducted more than $61,000 in renovations at Station No. 1, which is off First Avenue West, after mold and drainage issues were discovered at the building.

Alabaster’s firefighters work 24-hour shifts from 7 a.m.-7 a.m., and are off for 48 hours following their shift. Because the firefighters spend a significant amount of time in the fire stations during their shifts, the stations serve as a sort of second home for them, Golden said.

“If we can do some upgrades to make your working environment a little bit better, we certainly want to do that,” Bedsole said.

Competitors in the first Mayhem on the Mountain fitness competition will combine elements of CrossFit and the outdoors as they... read more