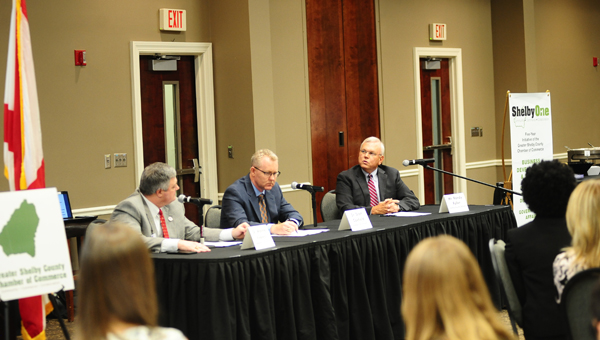 School superintendents over Alabaster, Pelham and Shelby County addressed the state of the school systems within Shelby County July 29 at the Greater Shelby Chamber of Commerce luncheon.

Creating partnerships with business and community leaders was a topic each of the superintendents touched on, mentioning the academies each of the systems has implemented to create real-world scenarios for students.

“In curriculum, we really looked at partnerships related to the area of being prepared for the workplace or college,” Coefield said.  “So we are really excited about the development of some of our career academies. We are launching several of those in things like engineering and bio-medical.”

Although Pelham is launching those academies this year, Alabaster and Shelby County have already been using those real-world applications. Each of the academies has an advisory board made up of experts in fields, such as engineering, who help plan the content of those courses.

“Providing quality instruction and quality real world experiences has to get beyond the classroom,” Vickers said. “I think that’s probably the most important thing that we will do.”

He added that the schools look to the community to provide internships and academies to better prepare students for higher demand and higher waged jobs. Vicekrs said the involvement between student and the community in Alabaster has worked well, and the number of students requesting academies has doubled.

“Our doors are always open to business leaders and community leaders in helping us to improve our schools,” Fuller said.  “There are a lot of different ways.”

An audience member at the luncheon expressed his concern with the math portion of the schools, stating that many youth cannot add or subtract without a calculator.

“We recognize through our assessments that our scores are not where they should be and our math levels are not there, but we are working very hard to improve those,” Fuller said.

He explained that, similar to Alabaster and Pelham, Shelby County teachers are participating in professional development, math coaches are being hired for the schools and academies are aiming to help students connect with math and sciences.

“If we are going to compete globally, I think we all agree that math and science are areas that we need to improve,” Coefield said.

Pelham is going mapping its curriculums, Coefield said, as a part of Rigorous Curriculum Design to vamp up the rigor of courses and improve the scores in math and science.

Vickers spoke on classrooms in a high-tech society, stating that “students are already there and we have to embrace that” by offering a 21st Century education. He revealed that he plans to put a device in the hands of every teacher and student in Alabaster over the next three years, so that Alabaster City Schools can “compete with any school system in the nation.”

Challenges with lack of funding in the schools, the loss of soft skills such as communication brought by social media and texting and duel enrollment versus advanced placement classes were also discussed at the luncheon.

“Learning in the future is going to be personalized, it’s going to be independent and it’s going to be virtual,” Coefield said. “So we have to find a way to get kids in collaborative groups because that’s the way they have to function and solve problems in the real world.”

Evangel is turning the reigns over to Micah Murphy, a rising junior, who will quarterback the Lightning offense. (File) By... read more