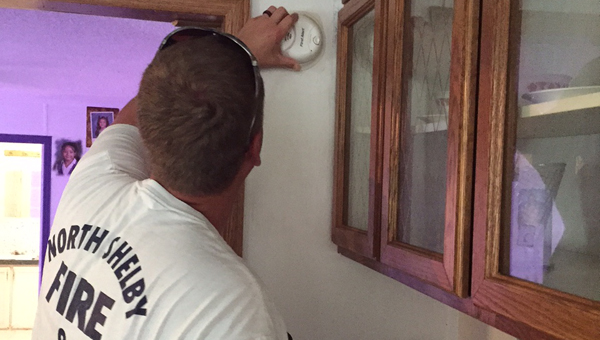 NORTH SHELBY—The North Shelby Fire District, with the help of two local businesses, made life safer for a number of residents.

The North Shelby Fire District was recently given a $1,000 fire prevention grant from the Wal-Mart Neighborhood Market on Valleydale Road, which was used to purchase 83 smoke detectors with 10-year lithium ion batteries from the Lowes on U.S. 280.

“Everyone that answered the door allowed us to install a smoke detector in their mobile home,” Tyler said.

Firefighters were able to install new smoke detectors in 70 homes.

Smoke detectors are key to fire safety, especially since many modern household items are made from flammable material, Tyler explained.

“You only have about three minutes before the fire reaches the flashover stage,” Tyler said. “Immediate notification is a must, three minutes is not a long time.”

“People remove the battery and never put one in,” Tyler said. “We decided to go with the 10-year (lithium ion batteries) because it takes out the human element.”

Girls at the Beauty and Brains Girls STEM Club summer camp experimented with Coke bottles one day at the camp.... read more