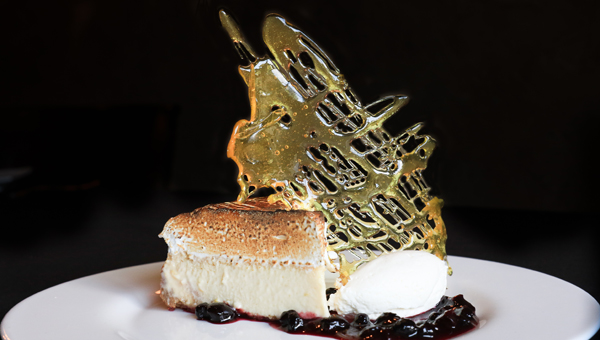 Bellini’s pastry chef Amber Croom works to create desserts that are “art on a plate.” (For the Reporter / Dawn Harrison)

HOOVER—From a light lemon icebox cake topped with sugar ornamentation to a deep, rich red velvet cheese cake, the desserts at Bellini’s Ristorante look as amazing as they taste, thanks to visionary pastry chef Amber Croom. 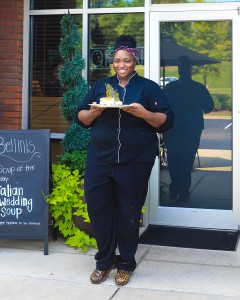 Pastry chef Amber Croom has been with Bellini’s since January 2013. (For the Reporter / Dawn Harrison)

“You have to think of it like art,” Croom said of her approach to her craft. “It’s art on a plate.”

Although clearly equipped with natural talent, Croom’s culinary career began almost by accident. Croom was one year away from a degree in naval architecture and marine engineering at the University of New Orleans when hurricane Katrina struck.

“When Katrina hit, my world was turned upside-down,” Croom recounted. “Something like that will change your life.”

Croom returned home to the Birmingham area to reconsider her path in life. While home, a friend encouraged her to enroll in culinary school.

Baking has long been one of her passions, Croom said, recalling memories of baking with her mother.

After graduating from culinary school and completing an externship at Rimini Gelato in Colorado, Croom’s career took her across the world, literally, as a pastry chef for the luxury cruise line, Silversea Cruises.

During her time on the ocean, Croom was exposed to and learned diverse cooking and baking styles across the world.

“It was terribly awesome,” Croom said with a laugh, recalling long 16 to 18 hour workdays for stretches of six months at a time. “Whenever I had time, I was going and exploring. It’s something I would recommend to anyone in the culinary industry.”

Croom noticed the pastry chef opening at Bellini’s while home between tours at sea, and after interviewing at the Hoover restaurant, made the decision to stay land-bound. Croom joined Bellini’s in January 2013.

“I had my plane ticket to go back on the ship,” Croom said. “But it turned out to be an awesome, awesome thing to do.”

“As soon as I met her, I new it was a match made in heaven,” Legace said. “She’s by far one of the most talented pastry chefs I’ve ever worked with… The love and passion she puts into it is just unbelievable. It’s so unbelievable to watch.”

Working at Bellini’s has allowed Croom to explore and develop her craft. With constantly changing bi-weekly menu features, Croom is often in the kitchen working on her next culinary masterpiece.

“I’m more creative, I take more risks now,” Croom said of her baking. “I have the time… to perfect (a dessert) before we put it out.”

“What she came up with was amazing,” Lagace said of the cupcakes.

The Alabaster City Council likely will vote on annexing the Fogle Lake subdivision during an Aug. 10 meeting. (File) By... read more