ALABASTER – A 22-year-old Maylene man is facing a felony domestic violence charge after he allegedly choked his girlfriend during a late-June altercation. 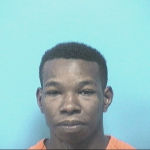 The Alabaster Police Department arrested Terald Jamal Chambers, who lists an address on Rock View Trail in Maylene, on July 27 and charged him with one count of domestic violence by strangulation or suffocation.

The charge is a Class B felony, according to Alabama law, and is punishable by up to 20 years in prison upon conviction.

According to his arrest warrant, Chambers allegedly “grabbed (his girlfriend) around the neck, choking her,” during an altercation on June 25.

The domestic violence arrest was not Chambers’ first run-in with the Alabaster Police Department.

In 2012, police arrested Chambers and charged him with one felony count of third-degree burglary after Chambers attempted to steal items from a Maylene home. He pleaded guilty to the charge in August 2012, and was sentenced to three years of probation to be served in the Shelby County Work Release Program.

Chambers’ probation was revoked after he pleaded guilty to another third-degree burglary charge in May 2013. The charge came after Chambers broke into a neighbor’s house and stole several items.

He was serving a three-year sentence in the Shelby County Community Corrections program when he was arrested and charged with the domestic violence charge, according to Shelby County Circuit Court records.