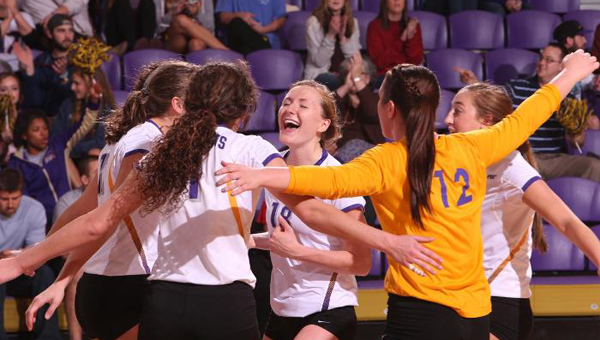 The Falcons were one of only 113 NCAA Division II teams to receive the prestigious academic award from the AVCA. Montevallo was one of only four teams in the Peach Belt Conference to receive the accolade, joining Armstrong State University, Georgia College and USC Aiken.

The AVCA announced that a record-breaking 752 teams across the country have earned the Team Academic Award for the 2014-2015 season, including a record 113 NCAA Division II teams.

“A hearty congratulations to all the volleyball coaches whose teams won the AVCA Team Academic Award,” said AVCA Executive Director Kathy DeBoer. “Teams do not succeed in the classroom by accident any more so than they do on the court. The same coach who taught them volleyball skills cared enough about their academic achievement to gather their grades, calculate their GPA, and submit a nomination on their behalf. In doing so, these coaches sent a clear message that classroom success is just as important as volleyball success. All involved should celebrate this award!”

The AVCA Team Academic Award has become one of the AVCA’s fastest growing awards programs, seeing an impressive surge in teams honored over the past several years. Since the 2000-2001 season, the number of recipients have increased every single year but one, while amassing a 476 team increase over the span of the last decade. Since the award’s inception in 1993, the amount of award winners has increased from 62 to its current number of 752.

The Falcons will open the 2015 season Friday, Sept. 4 at the Queens University Invitational in Charlotte, N.C.  Montevallo will face King College in its opener at 3 p.m. Eastern/2 p.m. Central.

Montevallo will open the home portion of its schedule Tuesday, Sept. 15 at Trustmark Arena with a match against Miles College. First serve is set for 7 p.m.