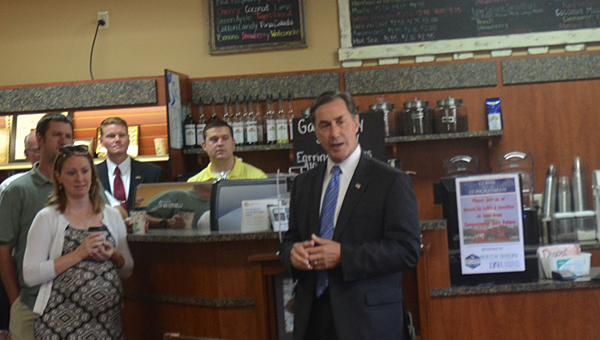 CHELSEA – On Friday, July 31, Congressman Gary Palmer came to Snider’s Pharmacy/Ground Up Coffee and Smoothies off of U.S. 280 in Chelsea. The event was sponsored by the Birmingham Association of Realtors.

Members of the South Shelby Chamber of Commerce, the Birmingham Association of Realtors, the Shelby County Sheriff’s Office, the Chelsea Citizen Observer Patrol and many others were in attendance.

Palmer represents the 6th Congressional District. He was elected to the 114th Congress in 2014.

During the event, Palmer touched on several topics, including videos that have been shared on social media about Planned Parenthood, the Iran Deal and Healthcare.

Palmer also talked about the health care system in America. Palmer said that the future of healthcare in in health savings accounts. He went on to explain the numbers that would go along with this idea.

Before being elected in 2014, Palmer had never served in office. Palmer serves on the Oversight and Government Reform Committee, the Budget Committee, the Space, Science and Technology Committee and also represents Alabama, Georgia and South Carolina on the Republican Policy Committee.

Hundreds of Birmingham-area YMCA kids, some of who came from the Alabaster YMCA and Hargis Retreat Camp in Chelsea, enjoy... read more