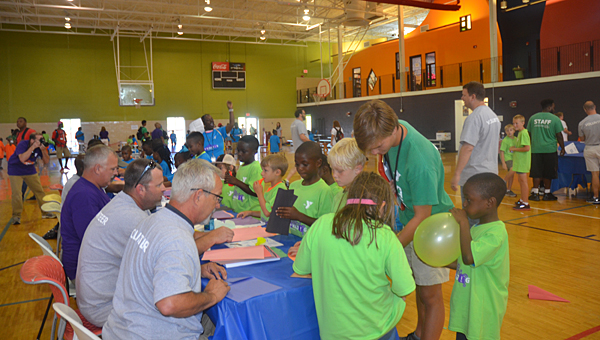 Hundreds of Birmingham-area YMCA kids, some of who came from the Alabaster YMCA and Hargis Retreat Camp in Chelsea, enjoy the Thingamajig Convention in Birmingham on July 30. (Reporter Photo/Jennifer Bailey)

BIRMINGHAM – On Thursday, July 30, the Birmingham YMCA Youth Center was filled with more than 300 excited children who were ready to spend the day learning and participating in several different educational activities.

These children were from the Alabaster YMCA, the Birmingham Youth Center and YMCA Hargis retreat in Chelsea.

The YMCA’s Thingamajig Invention Convention featured several activities that were designed to evoke the kid’s curiosity and creativity, as well as keep them active.

The kids split up into groups from their YMCA branches and were able to move around the Youth Center and take part in activities such as obstacle courses, experiments and educational presentations.

Some of the stations included a “Trashin’ Fashion Show” at which the children could create new fashion statements using recycled and reclaimed materials, human anatomy, “Flying High” where the kids could create different paper airplanes and see their flight patterns and “Noses Know,” at which the kids would smell different things without looking and see if they could tell what it was.

Alabama Power also set up its “Mobile Power Display” presentation so that the kids could learn about how power is used in their own houses.

Gabriella Black from the Alabaster YMCA said that learning about human anatomy was her favorite activity.

YMCA Hargis Retreat member, Christian Hunt said he enjoyed the “Toast Art” activity. The kids were able to use colored butter to paint a piece of bread, and then the bread was toasted, giving the kids a personalized and colorful snack to eat.

Hayden Haggerty and Alex Holt, both from Hargis Retreat in Chelsea, agreed that the obstacle courses were the best activity.

Alabaster YMCA member, Koren Davidson also thought that the obstacle courses were fun. He said, that he tried his was “running every time,” and that is why he liked them the best.

Rhonda Elmore, the executive director of the Alabaster YMCA, said the event was a pilot event. She said she hopes to grow the event next year and incorporate more YMCA branches from around the Birmingham area.