COLUMBIANA – A 63-year-old Alabaster man is facing a trio of felonies and is being held in the Shelby County Jail on bonds totaling $26,000 after he allegedly distributed Oxycontin at a hotel off U.S. 31. 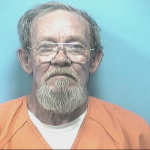 The Shelby County Drug Enforcement Task Force arrested Darrell Dewayne Franks, who lists an address in the 1500 block of First Street North in Alabaster, on July 31 and charged him with two felony counts of unlawful distribution of a controlled substance, one felony count of possession of a controlled substance and one misdemeanor count of manufacture of an imitation drug.

According to his arrest warrants, Franks allegedly distributed Oxycontin painkillers from Room 10 of the Shelby Motor Lodge on July 8 and again on July 15. Distribution of a controlled substance is a Class B felony, and is punishable by up to 20 years in prison upon conviction.

Franks’ manufacture of an imitation drug charge came after he allegedly attempted to distribute aspirin and caffeine pills while claiming they were oxycodone, according got his arrest warrant.

As of Aug. 3, Franks did not yet have a future court date listed in Shelby County District Court.