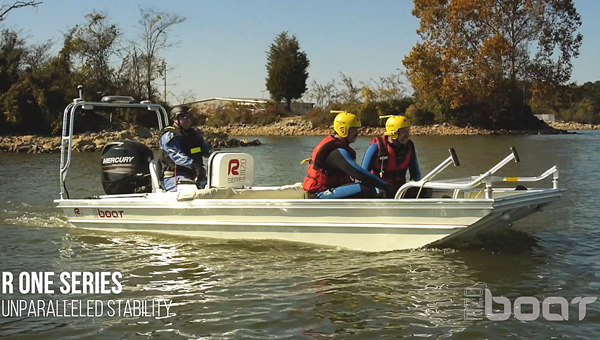 The Pelham Fire Department will purchase an R ONE Series rescue boat after a decision made by the Pelham City Council. (Contributed)

PELHAM— The Pelham City Council started its annual budget discussions at the Aug. 3 meeting. The human resources department was the first to present for the FY2016 budget, announcing that insurance would increase by about 7.8 percent.

Pelham City Council starts this discussion $12 million in the hole, according to City Council President Rick Hayes. He said the budget this year will be tight because of all the projects and opportunities in Pelham.

“Across the board as we start looking at all these different departments…this year is going to be a tough year because we want to do so much,” Hayes said. “There are so many great things that are out there for us, but the way the budget sits right now we have extremely low amounts of opportunity to slice and adjust.”

On the operational side of things, Mayor Gary Waters said each of the department heads sent in, what he considers, more than reasonable budget requests. Collectively they requested about $4 million less than they were given last year.

“We have a workforce that hasn’t had a COLA — we haven’t had a cost of living increase — in seven years,” Waters said. “I’m willing, if you are, to dig deep and to make some cuts. I think one of the first priorities should be to find the money for a COLA for the employees now.”

There are about 302 employees in the Pelham system, and Waters said he would like to see the council absorb the cost of the insurance increase of about $104,000. He would like to give the employees a 2 percent COLA and earmark $100,000 to do a vacation buyback the first pay period in December.

“(This) shows and tells the employees that we have their welfare at heart and are making every effort to keep their financial situation stable,” Waters said.

That total figure comes out to about $667,000, and Waters asked the council to keep that figure in their mind as they go through each of the budget requests.

Also at the meeting, the City Council approved an amendment to the FY2015 administration budget to purchase a new rescue boat for the Pelham Fire Department. The resolution allows the fire department to utilize funds that the Pelham Police Department received from an insurance settlement.

The fire department will use $32,810 to purchase an R ONE Series connector-style boat, a trailer and related equipment and electronics. Fire Chief Danny Ray said he would make the purchase Aug. 4, and the department should have the rescue boat in four to six weeks.

“By having this and having the ability to train, we can bring our people up to speed so they can we can be the ones people call and ask for help,” Ray said.

Right now, Pelham Fire Department reaches out to Calera Police Department when they are in need of a rescue boat. In having its own, Ray said they can train extensively and help out other cities in emergency situations.

This rescue boat is adept for shallow and flood waters and has a dive ramp, which would make pulling people into the boat easier. Ray said he expects to use the rescue boat about four times a year for rescue purposes and the department will be constantly training with the electrical equipment.

The boat will be housed at Station No. 2 and will be protected from the elements. Other cities do not have boats like this one, according to Ray.

“In the past, Hoover has been so generous to let us borrow things that it would be nice to have something we could use to also accommodate other cities as well,” said Council member Beth McMillan. “I think that would be very nice to have.”

THS wrestling looking to be a ‘national contender’