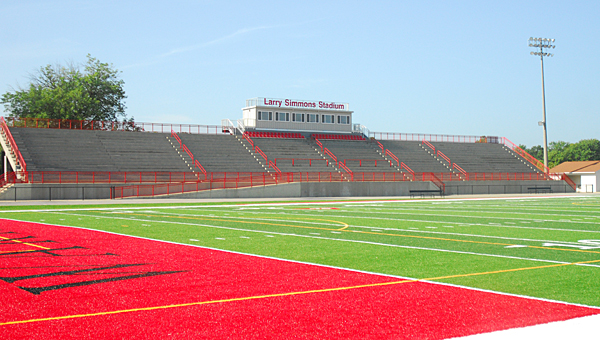 ALABASTER – The Alabaster community will look to rally around its football players during an upcoming pep rally at Thompson High School’s Larry Simmons Stadium.

The community pep rally, which is being hosted by the Alabaster Sports and Entertainment Foundation, will begin at 5:30 p.m. on Thursday, Aug. 20, and will serve as a kickoff to the Warriors’ 2015 football season, said ASEF President Jamia Alexander-Williams.

“We thought it would be a great way to bring the community together,” Alexander-Williams said during an Aug. 4 phone interview. “We need to come together and show these boys we are behind them 100 percent.”

Alexander-Williams said the event also will serve as a community welcome for new THS head football coach Mark Freeman, who is entering his first season with the Warriors after he was hired by the Alabaster Board of Education in December 2014.

Gates to the event will open at 5 p.m., and visitors will have a chance to peruse several food and retail vendors, including some selling Warrior gear.

The pep rally, which will be emceed by ABC 33/40 meteorologist Charles Daniel, will include music, special guests and the introduction of the 2015 THS football team and coaching staff.

The Aug. 20 pep rally will come one day before the Warriors kick off their 2015 season with a home game against Wetumpka. Thompson then hosts arch-rival Pelham on Aug. 28, Spain Park on Sept. 4 and Mountain Brook on Sept. 11.

The Warriors then play at Hoover on Sept. 18 before a bye week on Sept. 25. Thompson hosts Vestavia Hills on Oct. 2, travels to Hewitt-Trussville on Oct. 9, hosts Tuscaloosa County on Oct. 16, plays at Oak Mountain on Oct. 23 and hosts Chelsea on Oct. 29.