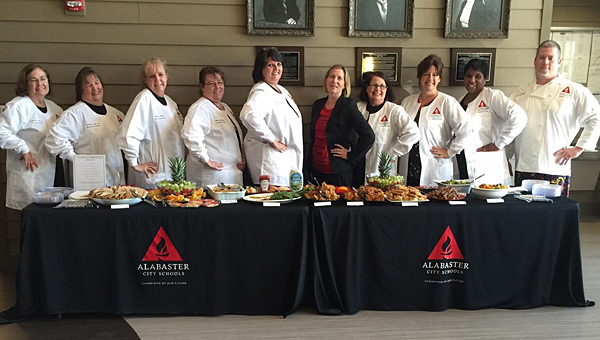 ALABASTER – When Alabaster children return to school on Aug. 13, they will be treated to a range of new cafeteria offerings such as an Italian pasta bake, the Warrior super salad and fish tacos with a fresh cilantro lime slaw.

Before their Aug. 3 meeting, members of the Alabaster Board of Education were treated to a buffet filled with the same items the city’s children will enjoy while eating breakfast and lunch at school during the upcoming year.

Over the past several months, chef Scott Lokey has been working part-time with the Alabaster City Schools child nutrition program staff members to improve the cafeteria offerings.

Lokey, who also works as the lead chef at a gourmet café in the Inverness Winn Dixie supermarket and previously served as the gardé manger chef at Birmingham’s Botega restaurant and café, brought his 26 years of cooking experience to the cafeterias of Alabaster’s schools after he was hired by the school system last spring.

Since arriving, Lokey has had a positive relationship with the CNP staff, he said during an interview after the School Board meeting.

“I didn’t come in here beating my chest. They were cooking just fine, but we just wanted to focus more on taste and freshness,” Lokey said. “It’s been better-received than I thought it would. I’ve gotten to be very close with all of them.”

For the past several months, Lokey has been dedicating one day a week to meeting with the CNP staff, working with the school system’s food vendors and tweaking cafeteria recipes.

Coming from the restaurant industry, where Lokey was accustomed to preparing $25-$30 plates at gourmet restaurants, into a public education setting came with a steep learning curve, he said. School meals typically come with a $2-per-plate budget.

“I’ve gotten a lot more comfortable with the guidelines,” Lokey said, noting he honed his skills by working with the ACS summer feeding program from May-July. “I’ve gotten a chance to meet with the (school system) vendors and work on some new recipes.

“We are excited about some of the menu items we will have this year,” Vickers said. “We appreciate what they have done.”

“He has accomplished a lot in a short amount of time,” McDermott said. “Our kids are lucky to have such a great CNP team.”