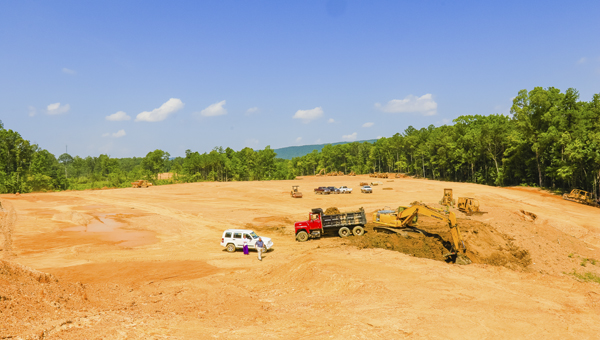 CHELSEA – The Chelsea City Council voted to advertise bids for parts of the first phase of the Chelsea Sports Complex project during an Aug. 4 meeting.

Following a discussion with City Engineer Frank Spencer, the council agreed to accept bids for the main park and lighting for the ball fields, which will require two separate bids.

“My goal is to let the two contracts start advertising next week,” Spencer said, adding he would allow three weeks for the bid process. “I hope to award (bids) at the first council meeting in September.”

Spencer said plans for the ball fields and parking lot already have been submitted to the county.

The next bid––for the complex’s concession stand––likely will follow the park and sports lighting bids by about a month, Spencer said.

Spencer discussed other facets of the complex with the council, including the number of parking spaces.

“We know we can get 211 (spaces), and your ambition is to get more, if possible,” Spencer said.

Spencer’s assistant, Keith Hager, noted the cost of the parking lot “goes up significantly” if more pavement is added to create more spaces.

The press box will have multiple rooms facing the ball fields for scorekeepers, a mechanical room and an umpires’ lounge.

The exterior of the concession stand building will be composed of split-faced block and Hardiplank siding and vinyl sockets for “as little maintenance as possible,” Spencer said.

“We do want lights overhead and electrical outlets for the batting cages,” Mayor Earl Niven said.

Having separate lights and electrical outlets for the batting cages would allow players to use the cages when the ball fields are not in use during rain delays and at other times.

Spencer asked council members if they would want to install a gate at the park. Niven said a gate would serve as a check-in area.

“What I’m thinking about is an access gate for the park, and we’ll incorporate that into this design,” Spencer said.

The council talked about, but did not make a decision on, whether to install netting around all of the ball fields, or just one, to prevent foul balls from hitting spectators.

As the discussion came to a close, Spencer said he would work toward getting a price for grading the second phase of the project as a budgeting item for next year, and “just to keep the park moving forward.”

“We’ve always got to be thinking forward,” Spencer said.

In other business, the council approved a resolution to purchase furnishings – tables, chairs and chair and table storage carts – for the new Chelsea Community Center.

Kids get a taste of the Australia at Lakeview’s VBS