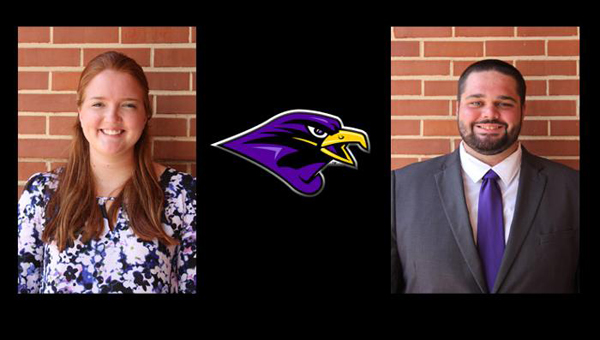 The Montevallo athletic training staff has added Maureen Wood and Trey Hollar to their staff for the upcoming school year. (Contributed)

“I’m really excited with the addition of Maureen and Trey to our sports medicine staff,” Galafassi said. “They did a great job during ODP camps and will work well with our student-athletes. They are definitely a good fit for our staff.”

Wood came to Montevallo from Lock Haven University, where she served as a graduate assistant athletic trainer for two years. While at Lock Haven, Wood worked with the football, women’s swimming, women’s basketball and women’s lacrosse teams. Wood graduated in 2015 with a Master’s of Science in Sports Psychology.

Wood, who grew up in Nazareth, Pa., completed her undergraduate degree in Athletic Training at the West Chester University in 2013.

Wood is a member of the National Athletic Trainers’ Association.

Hollar will work primarily with men’s soccer and baseball teams at Montevallo.

Hollar came to Montevallo from Northwestern State University, where he served as a graduate assistant athletic trainer.

Hollar, a native of Forsyth, Ga., graduated from Valdosta State University in May 2013 with Bachelor of Science in Athletic Training. While at Valdosta State, Hollar worked with every sport except women’s soccer.

Hollar is also a member of the National Athletic Trainers’ Association.