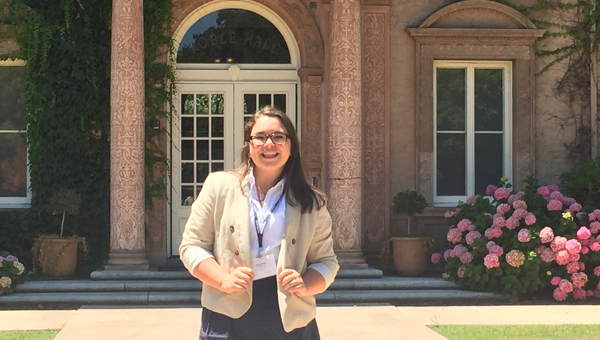 CHELSEA – Local teenager Brianna Braden has known for a while she wants to become a lawyer, but her experiences at a law program in California this summer reinforced her career plans.

“It exceeded my expectations,” Braden said of the program in an Aug. 3 interview. “I was very nervous before I actually went to the camp. I was afraid that the other kids would be geniuses and would be way above me … but then after I went there, I realized the kids there had the same fears I did. I realized I was among teenagers that had the same interests as me.”

Braden was one of nearly 230 students from 48 states invited to take part in Intensive Law and Trial, an Envision program offered in collaboration with Stanford Law School.

She said she was chosen for the program based on her PSAT scores, noting she scored in the top 3 percent for critical thinking and analysis.

Even so, Braden said she and her family were skeptical when the program invitation arrived in the mail in February.

“Honestly, my parents and I, we thought it was a scam,” Braden said. “My grandmother contacted the dean at Stanford, and she verified that it was a legitimate camp. After we found out it was real, I was amazed. I was flabbergasted.”

In the 10 days Braden spent at Stanford, she and fellow participants heard from lawyers, law professors and college students, who were facilitators for the program, about topics students would learn at law school, the admissions process and testing.

The students were divided into smaller groups of about 13 to prepare for and conduct a mock trial held at the San Francisco Superior Courthouse.

“It was a first-degree murder trial,” Braden said. “I was a defense attorney. We simulated what the trial would be like if we were actual lawyers.”

Braden said she spent “at least an hour-and-a-half every day” working on her case with the person she was defending in the mock trial, along with preparing an opening statement and working with witnesses she cross-examined.

“I remember working on it one day for about three or four hours,” Braden said. “It was exhilarating. It was very amazing being in front of a judge’s podium, even though it wasn’t a real judge. I felt like that would be something I could do every day as a career.”

“Most of them were very, very interesting,” she said. “It was just amazing to ask questions to real lawyers. I also loved being in the actual trial.”

In addition to the speeches and mock trial, participants had opportunities to get to know each other during after-hour activities, one of which was a visit to San Francisco’s Fisherman’s Wharf.

“Brianna felt at ‘home’ with this group of students from all over, discussing current events, controversial topics and having good discussions with her peers,” Kimmie Braden, Brianna’s grandmother, said.

Brianna Braden said she wants to go into either family law or disability law.

“I hope to be a child advocate either way, which means I would work with children and make sure that children get the best care that they can have,” she said.

Kimmie Braden described Brianna as “passionate about speaking for those who don’t have a voice.”

“We believed Envision Law Program was an opportunity for Brianna to have experiences to open her mind, see what being a lawyer was really like and experience the world on a greater scale,” Kimmie Braden said. “Being at Stanford she was in an environment to learn the importance of community, become a team player for a greater purpose and gain skills to be a future leader.”

Brianna Braden has taken part in the YWCA Heritage Panel, has been a student ambassador representing CHHS, has been a special education peer helper, has served as an alter server at her church and has been a camp counselor for the Alabama Institute for the Deaf and Blind summer Chill Out camp.

In an email about the Intensive Law & Trial program, Brianna Braden wrote, “None of this would be possible without the support and encouragement from my grandparents, Kimmie and Eddie Braden. Both push me to continue on learning, and to see the world as it really is, huge. They frequently tell me, ‘The greatest thing you have in life is your education; no one can take that away from you.’ I hope that one day I will make them proud by graduating law school, and practice in a field that I truly love.”

“Brianna has so much potential and the drive to do whatever she wants to – we are confident she will make change in her community and in the world,” Kimmie Braden said. “We will continue to give Brianna experiences that will challenge her to reach her full potential, academic ability and enhance her ability to serve in her community.”

Moving forward, Brianna Braden said she wants to become more involved in the “social justice scene and network in Birmingham.”

“I want to make Chelsea a better place for everyone, and I think … we can all become more inclusive and strive to be the very best we can be,” she said. “By going to this program, I want people to know that they can do whatever they want to do, whether that be attending a law camp at Stanford or something else. You always have to try for it.”