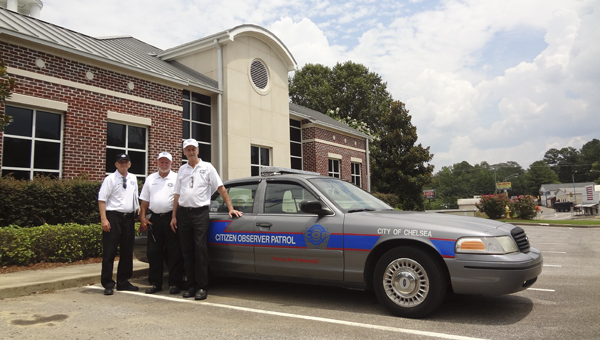 CHELSEA – The Chelsea Citizen Observer Patrol’s fleet of patrol cars is another set of wheels stronger.

With its newest acquisition rolling in about three months ago, the Chelsea COP currently has five vehicles at its disposal for patrolling the streets of Chelsea and answering emergency calls.

“Two of our older first cars are just about worn out,” COP member Donald Shirley said. “Any time we get another, we use the old ones less. Right now we have all we need.”

Shirley, who oversees the maintenance of the COP vehicles and drives them frequently for patrol, knows the wear and tear the vehicles endure perhaps better than anyone else.

“If they need new tires or an oil change, that’s my job,” Shirley said.

When the COP acquires another vehicle, a tag, title and insurance for the vehicle are secured first, and then, decals and paint are applied, he said.

All COP members that drive the patrol cars must complete driving school beforehand for insurance purposes.

The number of patrol cars being used at any given time depends on emergency calls and other events, such as school starting again and high school football traffic in the fall.

“We’ve constantly got things of that nature coming up,” Shirley said.

For Shirley, the nearly 40 hours he logs for the COP each month are spent on more than just patrolling.

Shirley said he recently answered a phone call from a resident who needed help removing a snake from her house late one night.

“Whatever somebody calls on, there I go,” Shirley said. “It’s fun to me.”

Shirley has been an active COP member for about 14 years, and was the 28th person to join the program shortly after its inception about 15 years ago.

As the group’s longtime “maintenance supervisor,” Shirley is content staying busy with the all-volunteer organization, comprised of more than 60 members.

“I’m retired. I don’t want to sit home and do nothing,” Shirley said. “As long as I’ve got the energy, I’m going to help somebody or do something.”

The back of the Helena Husky Football Stadium will soon be getting new aluminum skirting in addition to new batting... read more