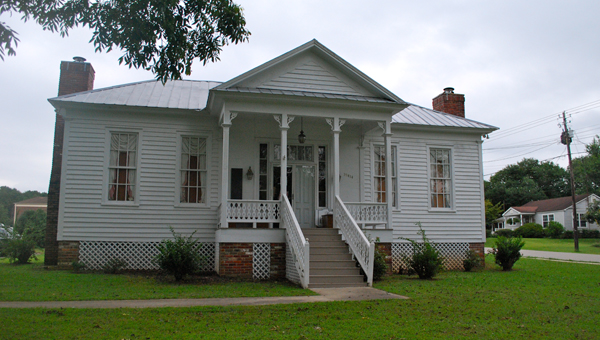 The Harpersville Library celebrated its grand opening with cake and refreshments on Aug. 7. The library recently moved into the historic Borum-Darby house on Alabama 25. (Reporter Photo / Molly Davidson)

HARPERSVILLE—The Harpersville Library was bustling with excitement on Aug. 7 as town residents gathered to celebrate the library’s grand opening.

A ribbon cutting was held at 10 a.m., followed by cake and refreshments in the children’s room of the library.

Moore along with library volunteers, residents, town employees and members of the Harpersville Fire Department worked to move the library’s nearly 15,000 books and DVDs into the new building. The Shelby County Commission pitched in, donating furniture for the new space.

The library’s new home features a spacious welcome foyer, a large children’s room and play space, a computer area, floor-to-ceiling bookshelves and plenty of comfortable chairs to read in.

“People have been really excited,” Perkins said of the new library, noting the more than 100-year-old Borum-Darby house is the “ideal spot.”

Harpersville did not have a library when Perkins began campaigning for mayor 11 years ago. After he took office, the library was established in a metal building on Alabama 25.

“It worked well at the time,” Perkins said, but noted recently the library “needed a larger building.”

Shelby County 39 resurfacing will be complete before school starts

A resurfacing project on Shelby County 39 is on track to be complete by the start of the new school... read more