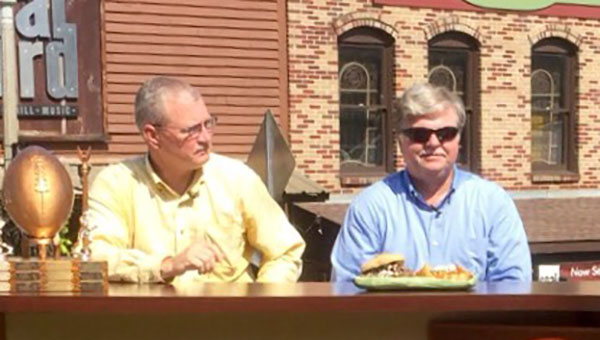 As the summer draws to a close, and the sticky summer heat slowly subsides, the cool autumn air begins to creep in and the bright, Friday night lights are turned on.

Football may be just a game in some places, but in the South, football reigns supreme, even at the high school level.

Rivalries and traditions are a big part of what makes football special, and this season Pelham High School and Helena High School have decided to kickoff a new tradition of their own.

Helena Mayor Mark Hall and Pelham Mayor Gary Waters agreed to start a new tradition between the schools, and that is the presentation of a Mayor’s Trophy to the winner of the game beginning this season.

Helena and Pelham will meet for the first time on the gridiron on Friday, Aug. 21 at 7 p.m. at Ned Bearden Stadium.

Although the first meeting will be an exhibition game, there will be a lot on the line when the two teams meet.

“Mayor Waters and I have discussed adding a little fun to this years first historical football game as the Helena-Pelham game will open the season, by the presentation of the Mayor’s Trophy to the winners,” said Hall. “Gary and I thought it would be a lot of fun, and a great way to promote good sportsmanship to this brand new rivalry between two cities full of good friends.”

Waters discussed that Pelham and Thompson already have a similar rivalry that includes a mayor’s trophy that has been a long-standing tradition for many years.

“We have a trophy that goes between Pelham and Thompson High School and the trophy is made up of the first ball and first tee from the first game,” said Waters. “We plan on doing the same thing with Pelham and Helena. It’s going to be serious but also a lot of fun.”

The art departments at Helena and Pelham High School are going to collaborate to design the rivalry trophy that will be used for years to come.

“The mayor of the city whose team loses will present the winning mayor a trophy at the schools next pep rally, in front of the victors’ student body, which can be quite fun for the winners and a treat for all to watch,” said Hall. “I have many friends at Pelham as do many Helena athletes and students, so I am excited about having some great fun with this game and hope it becomes a tradition that continues for years to come.”

The back of the Helena Husky Football Stadium will soon be getting new aluminum skirting in addition to new batting... read more