New Panther on the prowl 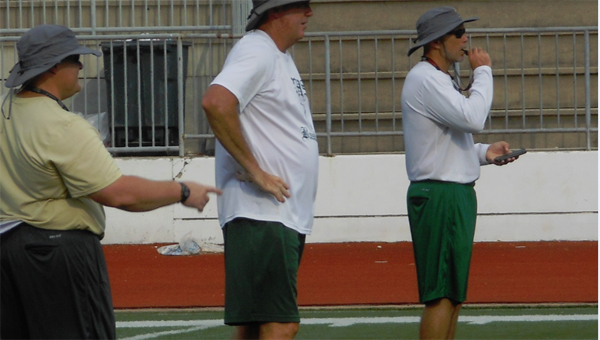 New Pelham head football coach Tom Causey is wasting little time in his effort to reestablish the Pelham Panthers as an elite program. In fact, no matter the outcome of this upcoming season, he is not using the fact that it is a rebuilding year as an excuse.

For coach Causey this is not his first go around as a head coach. He has previously coached at Demopolis, Andalusia and Dallas County.

Many would agree that Causey has hit the reset button. Every position is wide open as returning players are not guaranteed their starting positions from the previous season. Also, 33 incoming freshmen have joined the squad as well.

“There are some talented guys on this team without a doubt,” Causey said. “We just have to do a good job as coaches to make sure we are coaching up the little things so that athletic ability has an opportunity to be successful. If we get all of them doing that together, then we will have a good football team.”

Even though practice for the upcoming season is in its earliest stages, Causey said he is pleased that no serious injuries have occurred. “So far so good. You know you got the normal turned ankles here and there with some guys. But nothing serious so far, thank God” he said.

As far as player safety is concerned at the high school level, Causey believes the game has come a long way in its efforts to protect student athletes “I think with our new rules with the AHSA that will help some. Us coaches being smarter about how we practice the guys will help a ton too,” said Causey.

Pelham will host Helena in their Jamboree game on August 21before traveling to arch rival Thompson the following week for their season opener against the Warriors.

By BAKER ELLIS / Sports Editor The Eagles from both Oak Mountain and Calera checked in to the top 10... read more