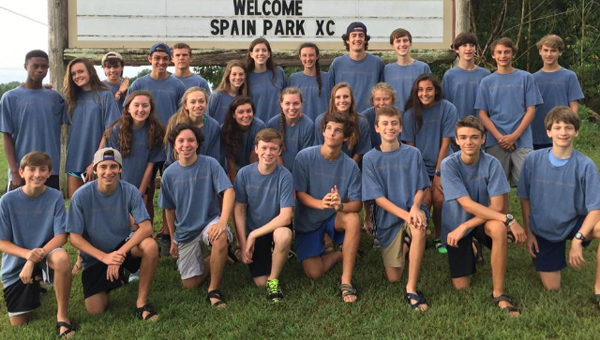 The Spain Park cross-country team recently returned from a three-day camp and are looking forward to the upcoming season. (Contributed)

In 2014, the Spain Park girls cross-country team was a perennial top-5 team in the state. The problem was, the Lady Jaguars competed in undeniably the toughest section in the state, 7A Section 3, with Mountain Brook, Hoover and Vestavia. Only three teams from each section make it to the state meet, and the Lady Jaguars were the odd team out last season. Incidentally, Mountain Brook, Hoover and Vestavia finished one, three and five at the state meet. This season, both the girls and the boys teams return a large chunk of last seasons’ productivity, and head coach Michael Zelwack is expecting big things this fall.

Zelwack and both the boys and girls cross-country team have an annual camp in Town Creek, Ala., which this season lasted from Aug. 3-6 where they took time to establish goals for the upcoming season.

“We took a more intense approach this year,” Zelwack said, noting the disappointment for the girls from last year. “We probably covered around 25 miles in two and a half days.”

Zelwack said he expects big things from Zoey Shore and Sarah Sims McGrath on the girls side this season. Both are rising seniors and both finished in the top 10 of the 7A 1,600-meter and 3,200-meter state finals in this past track season.

“They had a great year last year for us,” Zelwack said. “Zoey ran around a 19:20 (5K) last season and Sarah Sims ran about a 19:40. We have a good crop of young girls, too. We hopefully want to have seven girls under 20 minutes this year.”

The boys team last year struggled, and finished seventh out of eight in the sectional meet. They were a young team that are all coming back for another season, and Zelwack believes, if they can all get on the same page, they’ll be in good shape.

Spain Park will start the season at Montevallo at the end of this month.

New Panther on the prowl