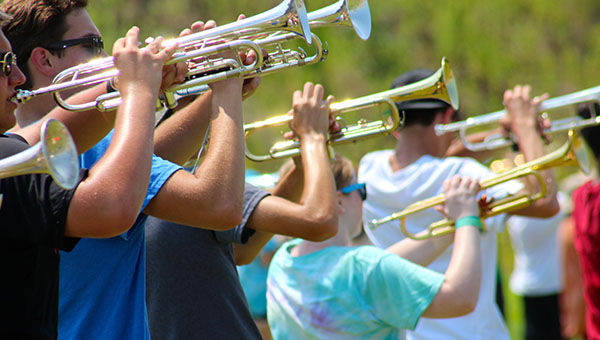 Burnside said that each day of camp broke down into three different categories of practice.

“Camp basically breaks down into three things each day,” said Burnside. “We start off in the morning and do fundamental marching and then work on drill and set formations till lunch. After lunch, they go inside and the musicians work on music.”

Helena tries to do the majority of their afternoon work inside to miss the hottest part of the day.

Burnside said the theme of this year’s show is “the time of your life” and all the music in the show will include songs that have the word “time” in it.

The songs featured will be “Only time will tell” by Asia, “The longest time” by Billy Joel, “Old time rock and roll” by Bob Seger and “Time of your life” by Green Day.

The Helena Band Boosters recently received $8,000 in donations from the Buck Creek Festival’s Duck Race and Burnside said that the money is already being put to use for the purchase of new equipment.

The Helena Huskies first football game will be Friday, August 21, against the Pelham Panthers in a rivalry exhibition game at Pelham High School.