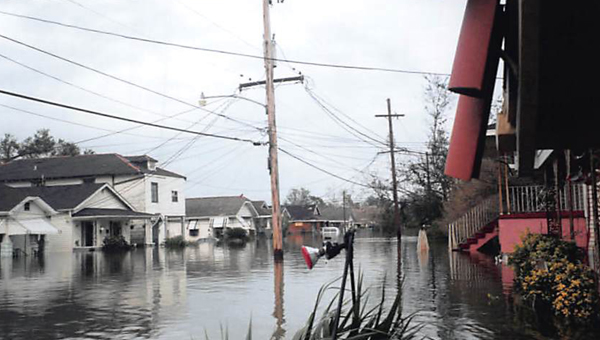 From inside their home, the Chins could see nothing but water surrounding them on all sides after Hurricane Katrina hit New Orleans. (Contributed)

PELHAM— Lionel, Shirley, Lionel Jr., and Lynella Chin survived Hurricane Katrina. They spent three days trapped in their attic, were turned away from shelter and finally found refuge in the most unlikely place: Pelham. 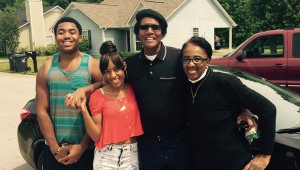 It was Saturday, Aug. 27, 2005, and Chin was helping her sister with a garage sale in New Orleans when she got a call from her niece, telling her to pack up and leave. Chin told her husband, but the problem was they didn’t know where to go.

“You can’t just pack up real quick and leave like that,” Chin said. “Where are you going to run to? So my husband just said, ‘We are just going to have to trust and believe God. (Believe) he is going to see us through the storm like he does all the time.’”

The warnings to evacuate continued at church the next morning, when the Chins’ pastor told everyone to go home, pack up and “hunker down” for the storm. So the Chins went home and prayed.

It wasn’t long before water started filling up the house, coming in through the floor vents and the bathroom. At that point, the Chins were trapped. There was no running.

They spent three days in the attic, with candles as their only light. They only had enough food to last them two days. By the time rescue boats made it to their house at 9:30 p.m. the third night they hadn’t eaten all day.

The boat took them to the interstate where they hitched a ride to the Mercedes-Benz Superdome on the back of a truck with about 50 other people. They didn’t find shelter there either. The Superdome was full and they weren’t taking any more people, and neither was the train station.

It wasn’t until they hitched a ride on a Trailways Bus to the Baton Rouge River Center that things started to look up for them. A man invited them in and gave them a cot to sleep on and a meal for the night.

Lionel Chin worked as a truck driver for Moore-Handley Inc., which just happened to be based out of Pelham. After calling his employer, they sent a van to picked up the Chins from the River Center.

They drove them to Pelham on Sept. 3, and decided to attend Westwood Baptist Church. Together the entire congregation prayed for the Chins and all the other Katrina victims.

“From there it was just one blessing after another,” Chin said. “We would go to church and every time somebody would come up to us and saying, ‘You are the people from Katrina.’”

The Chins stayed at the Sleep Inn for three months, and every day a different person from church would take them out for breakfast, lunch and dinner. People brought them food, took them shopping, bought all their clothes, gifted them with gift cards and more.

Chin even bonded with one member of the church in particular, Darlene Carrigan. Carrigan helped Chin register Lionel Jr., 9, at Valley Intermediate School and Lynella, 19, at Jefferson State Community College.

After driving the kids to and from classes every day, Carrigan would pick up Chin and take her out looking for houses. Although the Chins’ home wasn’t significantly damaged, they didn’t want to go back to New Orleans.

The Department of Housing and Urban Development was working with all the hurricane victims to provide them with houses and the Chins were able to get a house in Pelham. FEMA even supplied them with new kitchen appliances, a washer and dryer, new carpeting and $16,000 to furnish the house.

Chin’s husband went back to work for the same company, and the family has been there ever since. Lionel Jr. went through the entire Pelham school system and graduated from Pelham High School May 2014.

“There was nothing in New Orleans for us anymore because everything was gone,” Chin said. “We couldn’t go back. The world would just never be the same.”

Northcutt Dental is in the final stages of construction and will soon be opening their dental practice in Helena. (Reporter... read more