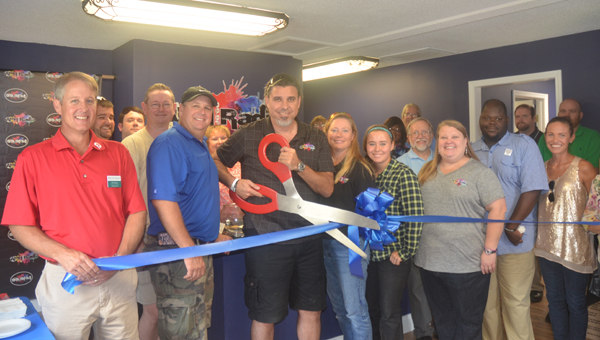 ALABASTER – On Monday, Aug. 10, APH Radio celebrated the opening of its new studio with a ribbon cutting. Supporters, sponsors and members of the South Shelby Chamber of Commerce came to APH Radio’s new location off U.S. 31 in Alabaster to tour the new facility.

APH Radio hosted an open house on Aug. 10 to give the public an opportunity to tour the station and see the location where the shows are aired. Station Manager Gene Rowley said everything in the studio was either donated or repurposed from supplies that he or other supporters of APH Radio had.

Rowley and his business partner, Phillip Prichard, said they chose the location because they both live in Alabaster. Rowley went on to say that the location is a central point in their listening area.

APH Radio has donated to several different organizations throughout Alabaster, Pelham and Helena.

Rowley said he is hoping APH Radio can continue to make an impact on the community through expanding, adding more people to the APH Radio team, and growing fundraising. Rowley said APH Radio offers “a different kind of radio station” to different kinds of people.

Rowley said APH Radio will cover the home and away games for these teams. APH Radio also covers the basketball, baseball and softball games for the local schools.

To listen to the different shows, tune to 99.9 FM or download the free APH Radio app, which is available for Apple and Android users.