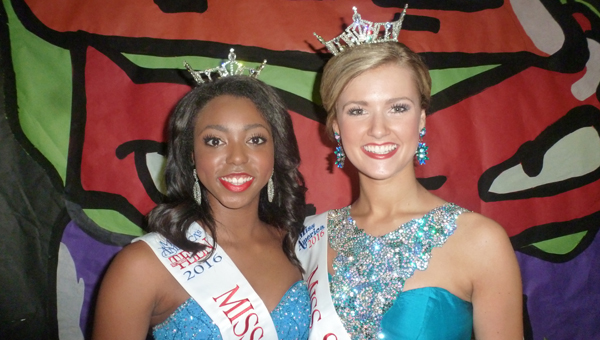 Barber, a senior at UAB, is the daughter of Karon and Mark Barber of Pelham. She is majoring in marketing and pre-optometry and loves to paint and dance. Her platform is “Sight for Small Eyes,” a program that she initiated after working at UAB’s School of Optometry at age 16 where she saw the need for younger children to be screened early for eye problems. She has established a fund for children with low vision that are legally blind.

“I come from a very altruistic family who loves to serve others,” said Barber. “I saw the need to help young children get screened for their vision to help improve their sight. If is so rewarding to see a child out on glasses and see correctly for the first time.”

Callens is the daughter of Cassandra and Michael Callens of North Shelby County. She is a junior at Oak Mountain High School, where she is a member of the National Honor Society, show choir and competitive show choir. She is an accomplished vocalist and dancer and has won national competitions and scholarships. She also won the Duke of Edinburg Silver Leadership Award, sponsored by the Miss Alabama Organization. Her platform is “We are Champions, Help Fight Breast Cancer” and has raised more than $6,000 for the American Cancer Society.