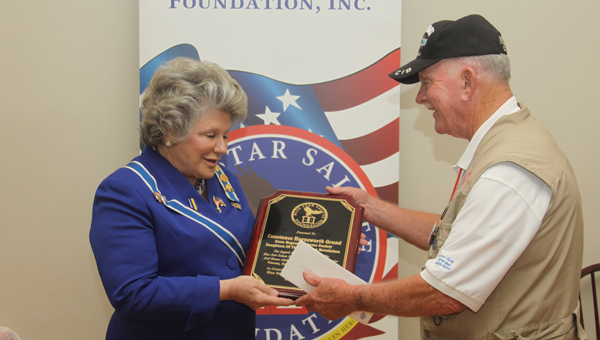 The Blue Star Salute Foundation, Inc. recently recognized Constance Haynsworth Grund, State Regent, Alabama Society Daughters of the American Revolution 2012-2015, for her “superb, persistent support of the Blue Star Salute Foundation’s effort to recognize and honor Alabama’s military service members, veterans, fallen heroes and their families.” The appreciation plaque with the above inscription was presented to her on Memorial Day at American Village.

“Connie has been such a wonderfully supportive leader of the DAR of all the endeavors and accomplishments of our BSSFI missions supporting/honoring Alabama’s military service members ‘who are now serving…have served (veterans)…those who have made the ultimate sacrifice in military service… AND, ALL their family members,” said Lt. Col. Glenn Nivens, U.S. Army (Retired), founder and acting secretary of the BSSFI.

“I was much honored to accept the recognition from the Blue Star on behalf of the 4,333 members of the ASDAR,” said Grund. “For the past three years, the DAR has gone to all deployment ceremonies in Alabama and has had a table next to the BSSFI where we give out Deployment Kits for Kids, which are basically little activity bags…which includes crayons, coloring pages, bookmarks, cookies and a paper Blue Star Banner to hang in their room. We also have a Prayer Board and invite any or all to write the name of a soldier in a star and we give the stars to our DAR Prayer Warriors. We attend the Armed Forces Day celebration in Mobile and assist in the rose laying ceremony for each Alabama soldier that has died since 9/11. We also donate funds to various BSSFI projects…especially Wreathes Across America …the Overlook Project at Alabama National Cemetery… and purchase another portrait of a Founding Mother to hang at American Village. We have previously donated a portrait of Martha Washington and have suggested Abagail Adams next.”