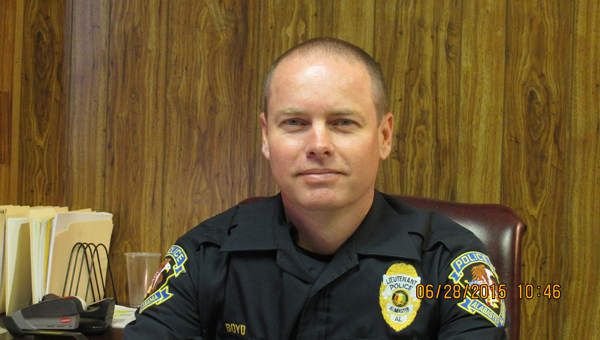 Jason Boyd has been with the Alabater Police Department since 1996. (Contributed)

Shelby County born and bred, Jason Boyd has great childhood memories of playing safely all over his neighborhood in the days before cell phones. He recalls his grandparents’ home as being the “safest place in the world.”

Boyd is the oldest of siblings Amy Griffin and Paul Boyd.

“My mom gave me the freedom to make my own mistakes but she was always there….no matter what,” he said. “Growing up seeing her work ethic made me who I am.”  (Mom Susan Winslett lives in Hoover now).

Wife Cindy, who has always been a full-time mom, has recently started substitute teaching in the Shelby County School System.

The Boyds are parents of Guy, age 14, and Chloe, age 12. Being involved and spending time with his family is high on Boyd’s list of priorities.

A 1992 graduate of Montevallo High School and a 1995 graduate of the University of Alabama Police Academy, Boyd has now accumulated 20 years worth of various law enforcement training and certifications. Boyd graduated from the FBI National Academy in 2007 after attending training in Quantico, Va.

“After 20 years of police work it doesn’t seem real to get paid for what I love to do. Every day I get the chance to make a positive influence in peoples’ lives,” Boyd said. “Don’t get me wrong, the job comes with a heavy burden, but the fact that I have been able to support my family by helping others puts everything in perspective for me. I believe anything worth having is worth earning.”

“The city of Alabaster is fortunate to have the best patrol sergeants in the state. I support them with whatever they need to make sure the citizens receive the best service possible,” Boyd said. “They know the current needs and make sure problems are addressed. I receive support from the chief and captain to perform my job to the best of my ability.

Brook Lovett with The Branch at Mission Hills, a new church in the Alabaster area, is an Alabaster native. (Contributed)... read more