Thanks to Zach Nichols for sharing his recent experience at Magic City Con. Nichols is the graphic designer responsible for the Helena Husky logo and also worked on promotional design for this event. 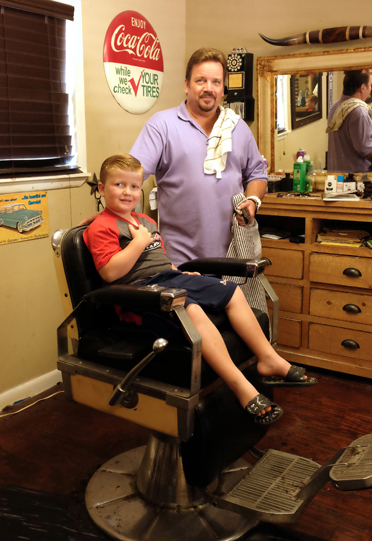 “When I first read that Phoenix Festival would not be happening this year, I was pretty bummed out,” Nichols said. “Being a proud member of the geek subculture, I loved that Birmingham finally had a convention that was worthy of our attendance.”

“As Malinda and I walked through the door at the Cahaba Grand Conference Center, we were greeted by Shadow Link, Joker and a family dressed as the Avengers,” Nichols continued.

“I have been to quite a few cons and I most enjoy the vendors and the cosplays,” Woodman said. “Each time I do different cosplays because it provides me the opportunity to express myself via mixed media art—sewing, sculpting, woodwork, leatherwork, and painting.”

In the past, Woodman costumed herself as Fionna, Captain America and Elsa. She appreciated that Magic City Con included a few panel sessions particularly for cosplayers.

Other panels discussed different aspects of geek culture, and there were interactive booths ranging from video games to shooting Nerf guns at Storm Troopers.

“If you wanted some rare comics to add to your collection, they had that. If you needed to get your hands on a vintage video game console, they had that too. If you desired a tattoo honoring your favorite fantasy, sci-fi, or anime character—they had it covered,” Nichols said, adding, “I managed to muster the self-control to not to spend every penny I have on geek treasures.”

“However, in the midst of all that the convention offered,” he observed, “I noticed something else that made the event special. The community. We geeks are a family. And we should be proud of it. Magic City Con celebrated that.”

“All I wanted to do was talk to people about Star Wars and Marvel Comics and video games. And that is exactly what my family and I got to do.”

“So next year,” Nichols said, “be sure to buy a weekend pass and support the local guys. I promise you won’t be disappointed.”

Check out magiccitycon.com for more information and see Nichols portfolio at: Thezendesign.com/.

Sunday Outing, 1907. Life was good in Helena in 1907. At least it felt that way on Sunday afternoons when... read more