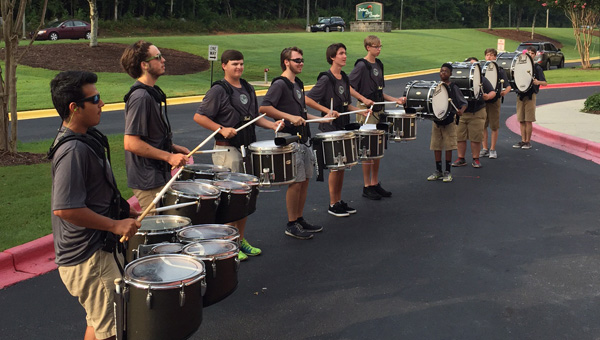 PELHAM— Pelham City Schools hosted a system-wide event for all its employees, allowing them to join in fellowship and inspiration as they kicked-off the new school year.

Institution Day was Aug. 6 at the Pelham Civic Complex, beginning with a performance by the Pelham High School Percussion Line. The music greeted staff members as they walked through the doors for the program.

“We played a fun and uplifting video that was created with submissions from current and former students who offered words of encouragement to our teachers about how Pelham teachers have made an impact on their lives,” said Nicole Knight, communications manager for Pelham City Schools.

Attendees heard a video message from Dabo Sweeney, head football coach at Clemson University and a Pelham graduate, who explained the impact teachers have on students. Sweeney also expressed his own pride in being a Pelham Panther.

Superintendent Dr. Scott Coefield provided an overview of accomplishments in the school system’s first year and new initiatives in the district. Pelham City Schools will add 1,500 new devices to the school system this year, he said.

Pelham has also implemented academies into the schools to focus on specific topics, such as law, engineering and medicine. Coefield told everyone in attendance that they all have an integral part in making the school system excellent for the community.

“We honored 10 retirees, six of which attended the event,” Knight said. “These seasoned teachers have over 200 years combined experience, they are an inspiration to all and will certainly be missed in the halls of the schools this year.”

A committee of teachers also made a presentation they’ve been working on for several months concerning a new teacher evaluation tool that focuses on professional practice, professional commitment and the impact on learning.

“I think everyone was interested in the content of the presentation,” Knight said.  “They provided an update on many things that were accomplished as well as where we are going, so I think (the staff) appreciated that information.”