Veteran of the Week: Burrus reflects on WWII 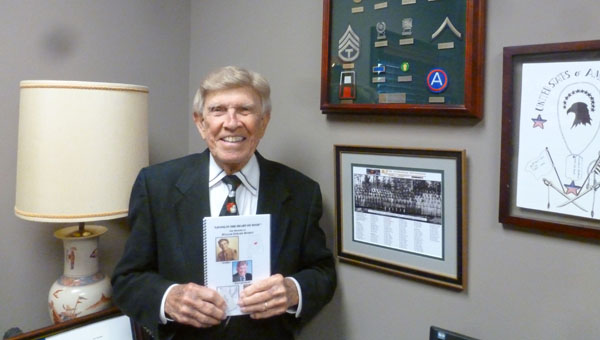 Technical Sergeant William Edward “Bill” Burrus, U.S. Army 1944-1946, fought across Europe into Germany as a infantry rifleman in 87th Infantry Division of General George Patton’s Third Army. Burrus is standing in his office on Valleydale Road holding his memoirs next to his Army awards and mementos. (Contributed)

World War II veteran William E. “Bill” Burrus of north Shelby County led the Pledge of Allegiance before the huge crowd of veterans and friends at World War II 70th anniversary at the Spirit of ’45 held on Saturday, Aug. 8 at the Alabama National Cemetery.

Burrus was a 15-year-old when Pearl Harbor was bombed in 1941 and World War II began. While a senior he turned 18 and was immediately drafted 1-A.

Instead of graduating with his class of 1944, Burrus was in basic training learning to defend his country.

“I was raised a strict Catholic and never even had a BB gun growing up,” said Burrus. “In basic training, the Army found I had a natural talent for shooting and I became a sharpshooter rifleman. Little did I know that my new found skills would put me on the front lines on the war!”

Technical Sergeant Burrus fought across German-occupied France, Belgium and Luxembourg during the Rhineland Campaign and the Battle of the Bulge.

He fought to take the Siegfried Line across the Saar River and then across the Moselle River.

Intense fighting continued as the 87th crossed the Rhine River under heavy enemy fire on March 25, 1945.

Burrus’ unit received a Presidential Unit Citation for their distinguished service and heroism that day.

His unit continued their march into the heart of Germany.

Burrus received his high school diploma during the war.

He returned home and became a successful insurance financial planner who has been in the Million Dollar Round Table every year since 1963 for the last 52 years.

He is actively working at age 89. He is a member of St. Mark’s Catholic Church on Alabama 119 and past district governor of the Lions Club.

He and his wife have three children, one deceased, 14 grandchildren and 18 great-grandchildren.

“The most important thing in life is to love,” said Burrus. “I grew up and was taught to do the very best I can in life. My Catholic faith sustains me. It carried me through the war and it has carried me throughout my life.”