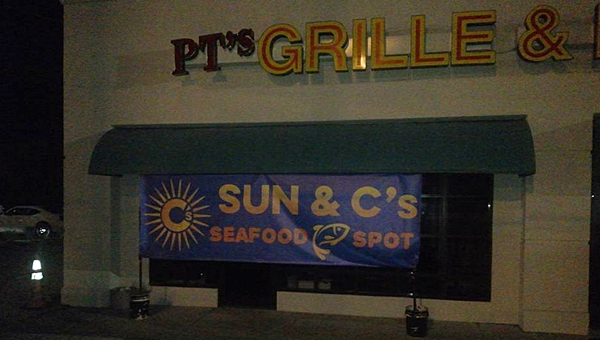 The Cholewinski family is planning to open a new seafood restaurant in the former PT’s Grille and Deli location off U.S. 31 in Alabaster. (Contributed)

ALABASTER – Alabaster soon will have a new seafood restaurant, as the owners of Chubb’s Grub Station in Alabaster and Chelsea are branching out into a new market.

Will Cholewinski, his wife, Stephanie, uncle, Dennis Cholewinski, and aunt, Sun Cholewinski, are making their final preparations in opening the Sun and C’s Seafood Spot in the former PT’s Grille and Deli location at 1207 First St. N. in Alabaster.

PT’s has been closed for a few months, prompting the building’s owner to seek a new tenant, Will Cholewinski said. For Cholewinski, the decision was simple.

“I love seafood, and there’s not a seafood restaurant anywhere around us,” he said during an Aug. 11 interview, noting the restaurant was named in honor of his aunt. “Basically, it will be a good, local seafood place.”

The family currently is conducting minor renovations to the former PT’s location – such as knocking down a wall and repainting the interior – and is working to open Sun and C’s by “the first week in September,” Cholewinski said.

Once open, the restaurant will have seating for about 80 guests, and will serve a range of seafood offerings such as grilled fish, steamed crab legs, ruby red shrimp, clam strips and crab claws.

“We are going to start off slow and grow as we go,” Cholewinski said. “I’m really trying to make this a family thing. We want to do the same thing we did with Chubb’s.”

The restaurant has already obtained its necessary health inspections, and the Cholewinskis have laid out a tentative menu. The family also is looking to hire additional cooks and staff at its two Chubb’s locations and at Sun and C’s.

Sun and C’s will also continue the Cholewinski’s tradition of supporting locals in need.

Through the “Feed the People” program, the Chubb’s restaurants collect canned food items each month before donating them to local food banks. The restaurants also regularly donate portions of their proceeds to local charities.

“That’s what it’s really about for me. This is another place we can use for our Feed the People program,” Cholewinski said.