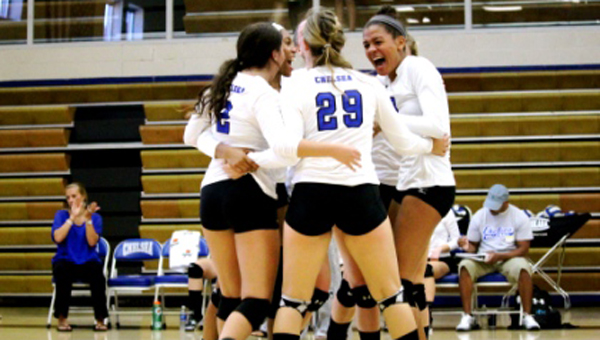 The Chelsea volleyball team is looking to take the next step in 6A. (Contributed)

The Chelsea Lady Hornets volleyball team spent all of last season ranked in the top 10 of class 6A, meandering back and forth in the lower half of the rankings for most of the year. Head coach Jessica Pickett is moving into her third year as the head coach of the Lady Hornets, and believes this will be her most well rounded team to date.

Destinee Benton is gone off of last season’s 26-13 team, but Pickett believes the infrastructure is in place to handle her absence. Primary among the names expected to lead this crop is Lexie Riggins. Riggins is a junior who Pickett put on the varsity squad in her first year as head coach, Riggins’ freshman season. She plays in the middle of the court and has the athleticism to cover a lot of ground in a hurry. Jordan Legg, a senior, is also going to be expected to lead. Legg is a junior who is moving positions to her more comfortable slot as a setter. Taylor Hackett, Jules Hamer and Princes Embree will all have to step into big roles as well.

Chelsea plays in 6A Area 10 alongside Oxford, who beat Chelsea last season in the area championship and was then knocked out of the super regional by Muscle Shoals in the first round. This season, Pickett said her team will be focused on doing what it takes to get the job done in the area.

“We want to host the area tournament,” Pickett said. “Obviously, Oxford will be a big game for us, that’s always a close game. We lost in five (games) at the area tournament to them last year, which was heartbreaking. We know we have to play well in the area.”

Chelsea will start the season in Montgomery on Aug. 27 with games against Jefferson Davis and Brewbaker Technology Magnet High School.