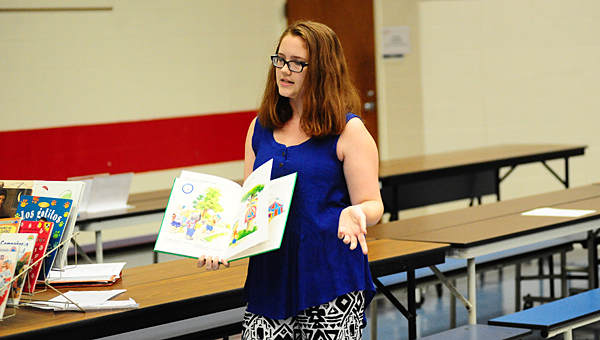 ALABASTER – When Thompson High School junior Tabitha Lawler was working as an aide in the school’s Spanish heritage class, she noticed some of the students in the class were having difficulty reading in their native language.

“The teacher would have them read aloud, and they really struggled with it,” Lawler said.

When she began looking at the Spanish-language reading options in the community, Lawler found they were limited, at best.

“You can’t buy these (Spanish) books at Walmart or Target. Most of them you have to order online,” Lawler said. “I was able to find some of them at Second and Charles (in Hoover).”

In an effort to help Alabaster’s native Spanish-speaking students hone their reading skills at an early age, Lawler has spent the past several months collecting Spanish books through a Gold Award project with Girl Scout Troop 993.

During her project, which she titled “Turning Pages,” Lawler collected 65 Spanish-language children’s books between January and August and presented them to the Creek View Elementary School library on Aug. 12.

“I think if they have a chance to learn to read in Spanish at an early age, they will be able to read better when they get older,” Lawler said. “A lot of kids don’t know how to read in either (English or Spanish) because they try to learn in both.

“If they can get Spanish books at the school library, they can take them home and their parents can read to them,” Lawler said. “I know when I was little, my mom read to me all the time, and that really helped me.”

CVES librarian Jackie Killingsworth said the school’s Spanish-speaking students will have an easier time learning to read if they have access to books written in their native language.

“I think it is important that they continue to learn in their native language,” Killingsworth said. “If they learn to be bilingual, they can get any job they want when they grow up.”