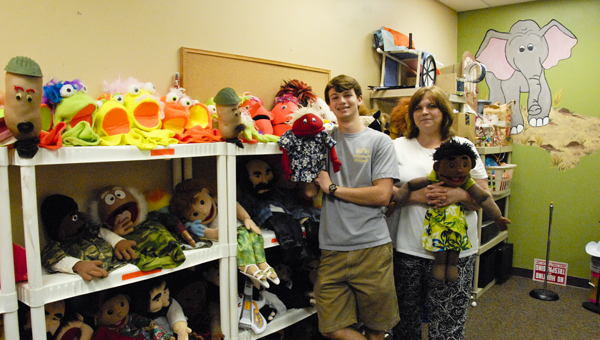 He is a regular in children’s worship, a favorite among youngsters and one of many characters appearing in Steppup, the church’s puppet ministry that has reached thousands of people since its formation about 11 years ago.

The ministry could have dissolved when founder Linda Johnson moved to another church, but Anita Hardy, interim preschool and grade school children’s director, and children’s intern Christopher Robinson refused to let that happen.

“Christopher and I just didn’t want to see it fall apart, so we stepped up and kept it going,” Hardy said. “If we can keep it together, we plan to carry it as long as the church wants it.”

The ministry is comprised of about 16 members in sixth through 12th grades that convey faith-based messages through skits and songs with puppets and other props.

“We basically share God’s word through music and skits by using puppets,” Hardy said. “You have to put a lot of thought into what music you pick out and how you present it with a puppet. It takes a while to pick out a song that really works.”

Robinson said it takes about two to three weeks to pick songs for each performance.

Each performance normally lasts 30-45 minutes – a long time for someone’s arm to hold up and move a puppet.

“You do build that arm strength, but it does take time,” Robinson said.

The group has added a twist to some performances: A black light.

In black light performances, the puppets and signs must be brightly colored to show up in the dark.

“The black light is just something that we started about four or five years ago,” Hardy said.

For the last eight years, Steppup has helped with the Alabama Institute for the Deaf and Blind’s Easter egg hunt and has performed Bible story skits for the students, allowing them to touch the puppets and props as they interpret the story.

“We get to see other teams perform, and we go to workshops,” Robinson said of the conference.

Hardy said the group did the best it has ever done at this year’s conference, snagging People’s Choice, Gold (first place) and Outstanding Choreography awards.

“For us to come back with three awards is a very big thing,” Hardy said. “We have never gotten People’s Choice.”

Hardy said she has made many of the puppets and props herself. Some puppets are made of recycled stuffed animals, while others are sewn and constructed from scratch.

“It takes a lot of space to store,” Hardy said as she looked at shelves lined with dozens of brightly colored animal and character puppets in a downstairs room of the church.

After a brief break over the summer, the group is ready to resume practices and performances.

“Everybody has a great attitude toward performances,” Robinson said. “I think it’s another way we can show the love of Christ through ministry.”

“It’s a good ministry for the youth, too, because it gets them involved in wanting to share God’s word,” Hardy said. “Sometimes, they’re scared to step out.”

To modernize the school and keep it up-to-date, Pelham High School has undergone multiple renovation projects including the gymnasium, auditorium... read more