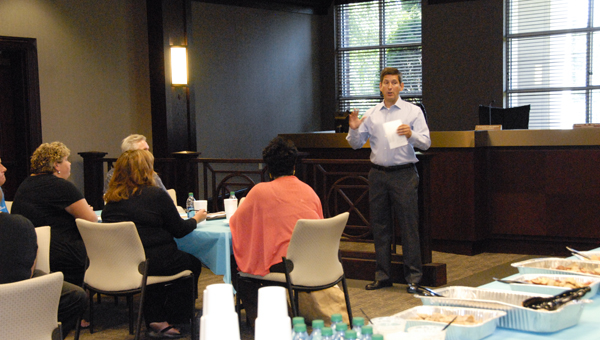 James Dedes, executive director of the Shelby County Economic and Industrial Development Authority, spoke to the Chelsea Business Alliance about business and industry growth in the county. (Reporter Photo/Emily Sparacino)

CHELSEA – A leader in Shelby County’s economic development spoke to nearly 30 people at a Chelsea Business Alliance luncheon on Aug. 12 about his group’s efforts to bring new companies into the area.

James Dedes, executive director of Shelby County Economic and Industrial Development Authority, talked about SCEIDA’s formation and its role in expanding industry in the county through recruitment.

“Our proximity to Interstate 65 is and remains an important factor in recruiting these companies,” Dedes said.

SCEIDA was incorporated by the Shelby County Commission in 1996 as a reincorporation of the Economic Development Council, which oversaw economic development for the county, Dedes said.

“The council ceased to exist, and the assets were transferred to us,” he added.

SCEIDA is governed by 15 board members appointed by the Shelby County Commission and is funded through a lodging tax.

“Essentially, we have a three-member staff,” Dedes said. “We lease space from the county.”

Dedes said although Shelby County does not have “a lot of flat, cheap property” to offer companies, its interstate, rail and airport transportation access are huge selling points.

“We have to demonstrate we have the right sites,” Dedes said, noting SCEIDA tries to maintain a database of available buildings and sites with acreage and other information pertinent to potential buyers. “We are making sure we are doing everything we can to sell buildings, create jobs and create a better quality of life.”

Dedes said SCEIDA is partnering with the Greater Shelby County Chamber of Commerce to conduct surveys with companies to gather feedback.

“Most job growth comes with existing companies,” he said.

Dedes touched on a project in which BioHorizons, a company that makes dental implants, is expanding in Riverchase.

He also said the aerospace sector is important for the county’s growth.

“We get really excited about these jobs because they are so fiercely competitive,” Dedes said.

Dedes passed out an aerial photo and accompanying list of sold and available sites of the I-65 corridor, noting the Hibbett Sports, Inc. site that constitutes a $40 million capital investment.

“(We) have to really understand what the market is (and) make sure they’re long-term investments,” he said.

Smith has to lead Yellow Jackets in 2015

Jordan Smith, 12, is going to be on the field for Vincent almost every play this season, and is going... read more