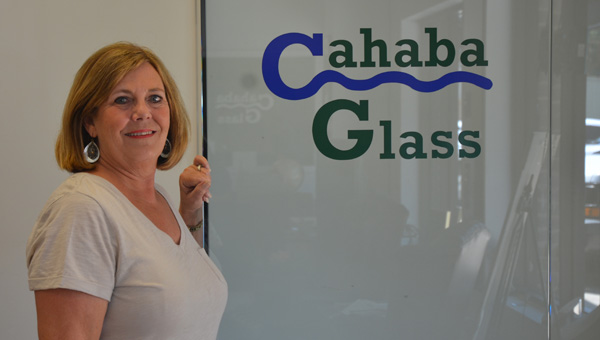 PELHAM— Terry Martin taught third grade for 30 years, from the moment she graduated college until her first grandchild was born in April of 1995. For the same number of years, her husband Charlie worked in the wholesale glass business.

Charlie would travel to mom and pop glass shops in small towns across the state, and Terry went with him during the summer months when school was out. The one thing Terry knew from visiting those stores: She never wanted to do what they did.

“We would leave and I would always walk out to the car and say, ‘I could never do that. I would never do that,’” Terry said.  “And here we are, all these years later, a mom and pop glass shop.”

Charlie and Terry Martin own Cahaba Glass, a family-owned and operated glass shop specializing in all types of glass, such as automotive, heavy equipment, shower doors, mirrors, table tops, windows and doors. Cahaba Glass, located at 160 Chandalar Place Drive in Pelham, has been open for about eight years and allowed Terry to transition from the educational world to the business world.

Back in 1995, Terry had been teaching third grade at Valley Elementary and Valley Intermediate for 30 years. When her grandchild was born, she decided she would finish the year and retire.

So she took on a clerical part-time position at a law office. Terry worked two or three days a week for about four years before Charlie decided he wanted to open his own glass shop, and he wanted Terry’s help with the storefront.

“I did not know what I could do,” Terry said. “I have gone from grading papers and filling out report cards to learning how to buy business licenses, pay sales tax and pay employment tax. That part has been a big transition. I had no business background. All of mine was in education.”

She learned all those skills “on the fly,” and she’s learned a lot about glass. She said it was a hard transition, she still asks questions, but Charlie even passes some smaller jobs to Terry now.

Every day brings different glass-related projects, which Terry said keeps things interesting. She also enjoys having more than 23 minutes for lunch and setting her own schedule.

While she said some small skills, such as organizing, problem solving and promoting a team environment, transferred over from her teaching days, Terry said it’s a completely different world.

“There’s just a bigger need for glass than I ever thought there was,” Terry said. “I didn’t know much about it. I know a whole lot more about it now. It’s an interesting business, and we have been very blessed and very fortunate.”

Second graders in Carol McLaughlin’s class get to know each other on the first day of school by plotting similarities... read more