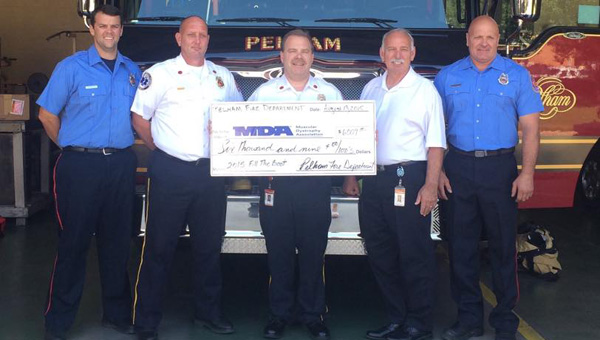 Crews with Pelham Fire Department collected more than $6,000 for the Fill the Boot campaign. (Contributed)

PELHAM— Each year, the Pelham Fire Department participates in the Muscular Dystrophy Association’s Fill the Boot fundraiser. Usually, crews are able to raise between $4,000 and $5,000, but this year, they surpassed expectations and collected more than $6,000.

“This is the first year we’ve broken $6,000 in a weekend, and it is just one weekend,” said Fire Chief Danny Ray. “It shows how benevolent the citizens are in supporting MDA.”

Crews set up at the Walmart off U.S. 31 Aug. 7-9, rotating shifts to spend an entire day at the entrance. Ray said this is typically something they hold annually in conjunction with students going back to school and with tax-free weekend.

“It’s something that I myself have been involved in well over 40 years,” Ray said. “It’s a fund that has focused on firefighters and their support of MDA for years. This effort that we are going through now, we’ve been doing it for more than 20 years. Its something we’ve always been a part of and felt the need to participate in.”

Fill the Boot is a national campaign in which fire fighters hit the streets where they ask pedestrians, motorists and other passers-by to contribute money in the boot for MDA. Those efforts help support MDA’s efforts to fund research, provide support services and rally communities.

Ray said the fire department will be participating in more events come September and October, relating to Sept. 11 and Breast Cancer Awareness month.