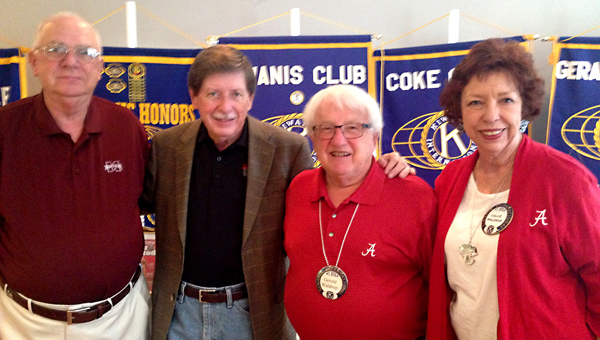 Surprise! This week’s column is about football, a language in which this columnist freely admits she is not fluent!

“Because of scheduling, talent, experience, intangibles and coaching, the Buckeyes are poised to repeat as national champions,” she said. “On paper before the season, no other team comes close.”

TCU, Alabama and Oregon are projected by Lindy’s to join OSU in the CFP Final Four team field.

However, missteps by any of those teams could vault Baylor, Michigan State,
Auburn and/or Georgia into the playoff.

“If the games were played on paper today,” summarized Scarbrough, “Alabama would meet TCU in the Cotton Bowl; OSU and Oregon in the Orange Bowl. Then the survivors, OSU and TCU, play in the Fiesta Bowl with the Buckeyes taking all the marbles.”

But today is today and tomorrow is tomorrow.

“Overall,” Scarbrough said, “the SEC from top to bottom is the best conference in the country. The SEC West is better than any of the others.”

Lindy’s picked Georgia to win the East and Alabama the West. But Scarbrough said that Tennessee and Arkansas were sleepers in their respective divisions and could appear in the SEC Championship Game because of scheduling and outcome of marquee games in each division.

“Even though Lindy’s picked Georgia to win the East,” he stated, “I think Tennessee will win the East, assuming the Vols beat the Sooners in Knoxville to give them momentum heading into the conference schedule. Tennessee has talent, experience and the intangibles going for them.”

“Although the Crimson Tide is picked to win the West and the SEC, any of the teams, from top to bottom, due to scheduling, unsettled quarterback competition and/or outcome of key games could win the Western Division. Don’t be surprised if the Razorbacks end up in Atlanta.”

The value of small groups