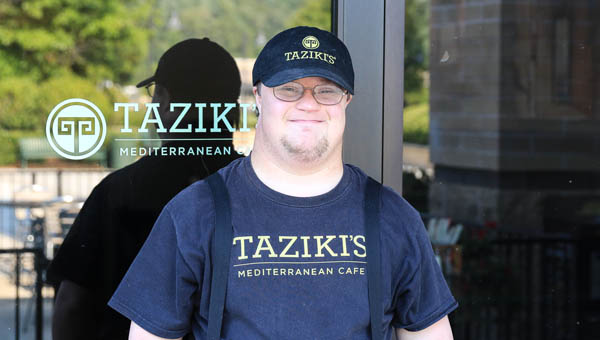 Mark McCallum takes a quick break from work to pose outside of Taziki’s Mediterranean Cafe in Lee Branch on Aug. 14. (For the Reporter / Dawn Harrison)

HOOVER—Mark McCallum happily reported to his job at Taziki’s Mediterranean Cafe bright and early on Aug. 14 and began expertly rolling napkins around silverware. Throughout the workday, McCallum diligently completes tasks to get the restaurant ready for customers, from placing chairs around tables to setting up umbrellas at outdoor tables.

“They’re doing the job skills that our customers really see,” Taziki’s Founder and Chief Development Officer Keith Richards said, explaining the employees with special needs perform a variety of tasks to keep each restaurant looking and running its best.

The National Association of People Supporting Employment First recently recognized Richards as the group’s Large Employer of the Year for Taziki’s “outstanding commitment to hiring and fully integrating individuals with disabilities into their workforce,” a news release from Taziki’s read.

“This all came about by happenstance,” Richards recalled. “(Cindy Vinson) had asked me if I ever thought of employing special needs individuals.”

Although Richards said he didn’t have prior experience in employing individuals with disabilities, he hired Brandy Nivens.

“When Cindy brought in Brandy, we just fell in love with Brandy,” Richards said.

Nivens has been with Taziki’s since that first day.

Each of Taziki’s 15 employees with special needs are given real tasks and held accountable, just like all of the restaurant’s employees.

“When you give them that task, they’re diligent,” Richards said. “They get paid just like everyone else… a job is a job is a job.”

In addition to performing quality work, Richards said the employees with disabilities always bring a positive attitude to the workplace.

“If you think you’re having a bad day, just come to Taziki’s when we’re opening up,” Richards said. “The workforce is almost a harmony, they bring a sense of calmness, it’s like being around a good person… you want to act better.”

Richards knows each one of the 15 employees with special needs by name, and views all of them as important parts of the Taziki’s family.

Working alongside employees with special needs has been an eye-opening, rewarding and inspiring experience for both Richards and the community.

“When other families with special needs kids come in and see a special needs employee, it gives them hope that there’s a future for their kids,” Richards said. “It’s opened my eyes to know what they can do. There are so many businesses that should be doing this.”