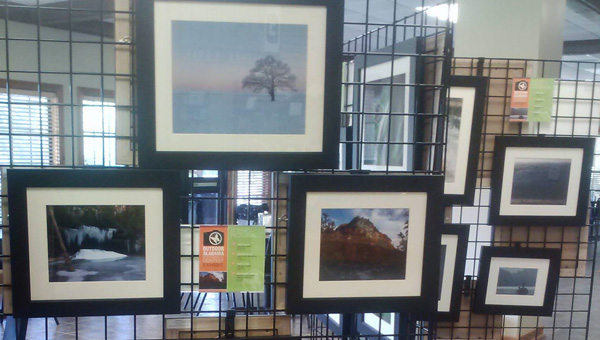 The winners of Outdoor Alabama’s 2015 photo contest are on display at The Oaks Clubhouse in Oak Mountain State Park. (Contributed)

The winners of the 2015 contest will be on display until Sept. 7, and guests can visit the exhibit daily from 7 a.m.-6:30 p.m. Oak Mountain State Park Superintendent Kelly Ezell said this is the first year the park has housed the annual exhibit.

“I thought it was such a neat thing, and when they called and offered, I told them we would love to host it,” she said.

The contest is open to any amateur photographer, excluding employees and family members of the Alabama Department of Conservation and Natural Resources. All photos must have been taken in Alabama.

Categories consist of state parks, birds, mammals (excluding pets and livestock), reptiles and amphibians, other native wildlife, scenic/pictorial, nature-based activities and plants and fungi.  There are also two youth divisions: youth ages 6-12 and youth ages 13-18. Those youth age groups can submit photos in any of the categories.

“It’s just got some awesome photos,” Ezell said. “Amateur photographers send in their work. It’s just a wonderful exhibit. If you haven’t seen it, you need to.”

Ezell said Oak Mountain was most likely chosen by Outdoor Alabama because of the high-volume of foot traffic OMSP has. The park has also been named as a top park in several venues, earning awards such as the TripAdvisor’s 2014 Certificate of Excellence.

“We have so much traffic through the park,” Ezell said.  “The golf course is very popular, and also a lot of people dine at the grill we have. We do have a lot of guests, so it seemed like a good opportunity.”

Outdoor Alabama is currently collecting submissions for its 2016 photo contest. Entries will be accepted until Oct. 31 and can be submitted online, which is a new platform this year.

Mark McCallum takes a quick break from work to pose outside of Taziki’s Mediterranean Cafe in Lee Branch on Aug.... read more