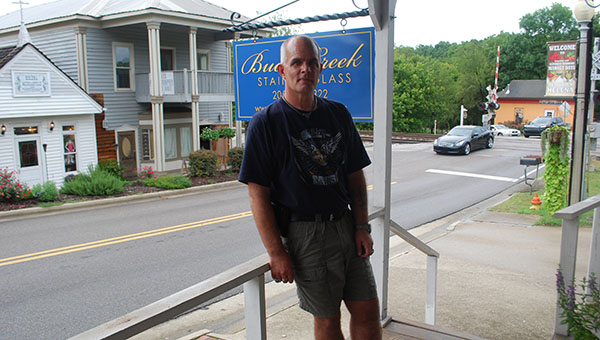 HELENA–When the doctor told Buck Creek Stained Glass owner David Schlueter that he would not be able to work for close to a year, Schlueter immediately knew that was not an option.

Schlueter has owned and operated Buck Creek Stained Glass in Old Town Helena for five years and was involved in a serious motorcycle injury when he was riding towards Mount Cheaha the day before Easter this year.

The crash left Schlueter with severe injuries that included a crushed ankle, severed Achilles tendon, a broken tibia and a broken left wrist all on his left side.

After being told by doctors that it would be a tedious and long road to recovery, Schlueter knew he still had to make money and provide for his family, regardless of his injuries and the pain he might be feeling.

After nearly five months since suffering his injuries, Schlueter is back on his feet and his shop has been reopened after being closed for two months.

“I had a lot of ups and downs,” said Schlueter. “I even found out down the road that I might lose my leg because of an infection. I’ve fought off two separate infections and my goal the whole time was to get back to work to pay rent and to provide for my daughter.”

Schlueter explained that his studio and work is different from a normal retail store because at other shops it can be easier to find a replacement to pick up missed work.

Buck Creek Stained Glass is known for restoring and repairing stained glass and Schlueter explained that if he didn’t work, he wouldn’t make money so that helped push him during physical therapy.

“I guess it’s just the Marine Corp thing I have inside of me,” said Schlueter. “I pushed myself in physical therapy and I got back in the studio starting with a few hours a day and moved up gradually. Now I’m working overtime because of hours I missed and I’m teaching six classes a week at the studio.”

Schlueter said he still has an electric wheelchair he uses and he can’t handle walking long distances yet but he has made steady progress. He said that if he had to give advice to someone going through something similar, he would tell him or her to not give up.

“Don’t give up and push forward,” said Schlueter. “Wake up everyday with that mindset. You have days with wins and days with setbacks. Don’t get discouraged and keep moving forward.”

The Life Hydrate Tour team members performed a skit about the dangers of bullying people, and the amount of teens... read more