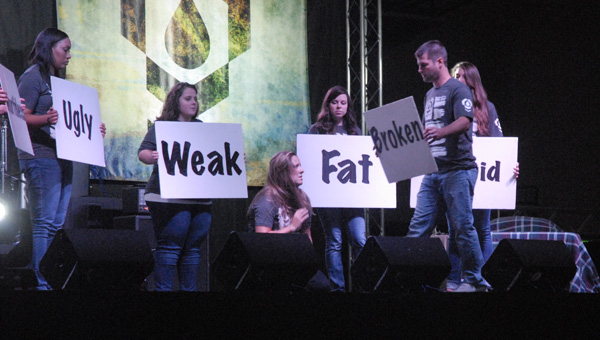 The Life Hydrate Tour team members performed a skit about the dangers of bullying people, and the amount of teens who are driven to suicide through bullying. (Reporter photo / Jessa Pease)

CALERA— Students at Calera High School learned about choices Aug. 18 when Hydrate Ministries visited the school. The students gathered in the gym at 8:30 a.m. to witness Hydrate’s Life Tour.

The program is one performed all over the country, and it’s mission is to visit middle and high schools stressing “the most powerful ability every person has: The ability to choose.” Through performances and skits, Hydrate addresses issues facing teens, such as pregnancy, drugs, alcohol, violence and suicide.

“Your choices determine your future, so what will it look like?” one video asked of the audience during the performance.

The event began with some live music, songs and dancing, along with a game of “Ready Spaghetti” to engage the students in the program. Then the students heard real stories from Hydrate’s team members.

One told a story of a 10th-grader who was expelled for gang-related activity. His story could’ve easily been ended at a shootout where he planned to get revenge for the rape of his friend. He said he could only imagine what would have happened if a bullet had been just one inch closer.

“My mom would have lost two sons, and for what? Trying to prove a point?” he said. “Violence is real, and gang violence can take you off this planet. I am here to tell you, you don’t have to live my life. All you have to do is make better choices.”

The students watched several videos and skits about the consequences related to the choices people make. They learned that taking one drink could cost lives behind the wheel of a car, that nude photographs can easily be circulated through an entire school and that scholarships can be forfeited for trafficking illegal substances.

At the end of the presentation, the owner and founder of the Life Hydrate Tour, Tim Beck shared his story. Beck explained that he grew up in a dysfunctional family where he and his mother caught Beck’s father in an affair. By age 11, Becks parents were divorced. He was smoking cigarettes by age 12, using alcohol and drugs by 13 and was sexually active by 14.

He was also arrested for destruction of property and vandalism by age 14. He told the students that it was easy to blame his father, his mother and his friends for his actions, but eventually he looked in the mirror.

“I didn’t like who I had become,” Beck said. “I didn’t like my bed, and it was very uncomfortable. I made it, and I had to lay in it…It was my actions, my decisions that led me down this path of destruction, but what if I would choose something different. What if I would care about myself and invest in myself.”

He told the students that he “grabbed life by the horns.” Beck was a flunking student who graduated with all A’s and one B, and he was the first person on his dad’s side of the family to graduate high school and go to college.

“It’s your life,” he said. “It’s your future. We dare you to make it beautiful.”

Cheyenne Thompson, left, and Katie Nelson will lead the way for the Montevallo women’s cross-country team, which is ranked No.... read more