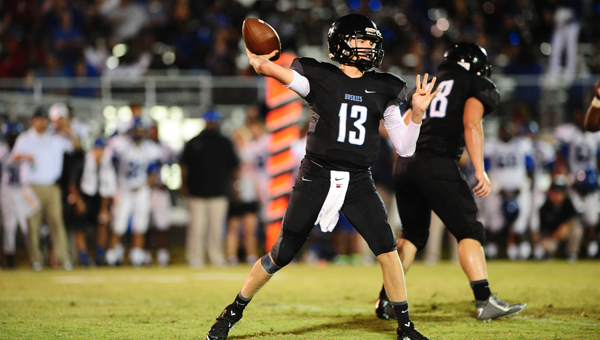 There are 16 county-versus-county match ups that will take place in 2015. Let’s take a look. (File)

We did it. We, as a collective unit, have made it through another sports-starved summer. It was a marathon, no doubt about it. Our feet may be cut and bleeding, our bodies may be bruised and sore and we may be stumbling across the finish line a broken, skittish shadow of our former selves, but here we are. Sports are back, and the sun shines a little bit brighter.

Because this is an exciting time, we’re going to do an exciting thing. We’re going to take a look at every single county-versus-county matchup coming up this fall. There are 16 in all, with at least one every single week of the regular season, save for one. Each team, except for Montevallo and Vincent, have at least one game against an in-county opponent, while some schools have as many as four. Because that would be an awful lot to write all at once, it’s going to come at you in three installments. Here’s part one, which deals with the most immediate county games.

Technically a jamboree, this game will not count toward the overall record of either team. Don’t let that fool you into thinking that the intensity level or atmosphere will be anything shy of a prime Friday night. This will be the first game the two schools have ever played and the matchup already has a rivalry game trophy, which has been dubbed the Mayor’s Trophy. It would be a hard task to find two schools more familiar with each other on and off the field, as a number of students went to school together before the schools split in 2014. This will be the perfect way to kick off an exciting fall season. It will also provide an early look at how new Pelham coach Tom Causey’s spread offense is going to look.

In the second game of the season for both teams, but the first official game of the year for Helena, Shelby County will look to avenge the 30-15 loss the Huskies dropped on the Wildcats a season ago. Shelby County is hopeful this season will be the year it begins to change course from the last few disappointing years, and a win over a tough Helena team would go a long way to making that a reality.

While both are 5A schools, Helena was the fifth-largest 5A school in 2014 out of 62 schools while Shelby County came in at No. 35. Helena has a bigger roster than Shelby County this year as a result, and the Wildcats will rely on many more two-way players than Helena will. A matchup to watch in this game will be Husky wide out Phildon Dublin going up against Shelby County defensive back Deon Carter.

This will mark the 28th time Briarwood and Chelsea have faced off. Last season Chelsea got the better of the Lions by the slimmest of margins, 23-22, but Briarwood still holds a commanding 19-7-1 series lead. The Lions have a jamboree against Vestavia on Aug. 21, but this is the first game of the season that counts for both teams. For Chelsea head coach Chris Elmore, this is an important season. Through two years at the helm, the Hornets are 10-10 and have missed the playoffs both years. Now, with a healthy backfield for the first time in over a year and a solid quarterback in junior Matt Marquet, Elmore knows this is the year his team needs to make a jump into the playoffs.

Briarwood head coach Fred Yancey is in a different boat entirely, entering his 26th season as Briarwood’s head coach, the patron of Lions football will most likely retire as their head coach whenever he pleases, be it a year from now or 10. Yancey is working in a new quarterback in William Gray this year, and this will be an early test for the junior against Chelsea’s three senior linebackers.

From a cultural and social standpoint, this is potentially the biggest game of the year in the county. Dubbed the Battle for U.S. 31, Pelham holds a 21-16 all-time advantage in the rivalry, and won last year in thrilling fashion, 23-19. The game is historically important to both communities and serves as a consistent athletic staple for both Alabaster and Pelham. From a football perspective however, it’s hard to know what this game is going to produce. Both teams have new coaches after last season the Warriors and Panthers went a combined 3-17.

New Thompson coach Mark Freeman has got the school and community excited for what the future will hold, as does Causey at Pelham. As this will be the second game of the year for Thompson, and the first real game of the year for Pelham, the only prediction anyone can make with any certainty is that the game will be sloppy at times. The question everyone in Alabaster wants an answer to is how will senior quarterback transfer Walker Lott fit into Freeman’s new system, and this game will be an early glimpse at an answer.

Brandon King, of Alabaster, goes through drills with the Patriots. (Courtesy of the New England Patriots/David Silverman) By BAKER ELLIS... read more