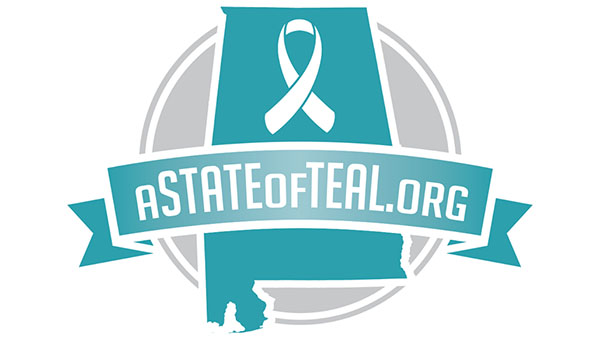 The city of Helena will proclaim the month of September as GYN Cancer Awareness Month to support organizations such as Astateofteal.org. (Contributed)

HELENA–Most people have been affected by cancer at some point in their lives and three women from the organization Astateofteal.org attended the Helena City Council meeting on Monday, Aug. 17, to try and raise awareness for cervical and gynecological cancer.

Malisa Hester, Joy Pederson and Jennifer Smiley attended the Helena Council Meeting to speak on the importance of the organization and the plans for the month of September.

“I’m here representing a state of teal which is a collaboration of foundations here in the greater Birmingham, Jefferson and Shelby County area that work to fund research for ovarian cancer and spread awareness and help with patient support for other GYN cancers,” said Smiley. “Alabama ranks pretty high, we’re in the fourth highest of death rates in ovarian cancer and the top six of cervical cancer so it’s really important that women know these signs and symptoms. So what we do in September is we get out and we try and light things in teal. We have over 100 buildings and municipalities from Mobile to Huntsville lighting and we have over 25 cities issuing proclamations.”

Helena Mayor Mark Hall said the plan is to light the bridge passing over Buck Creek teal for the month of September to show support and raise awareness in Helena.

“I just had ovarian cancer and I was diagnosed in June of last year and had my last chemo in November of last year,” said Hester. “I was fortunate that I’m an ultrasound tech and when I had a pain I looked to see what was going on and if I hadn’t of done that, it scares me to think of what would’ve happened so I’m just happy to be here.”

Cervical cancer is 100 percent preventable and curable when detected early, according to a fact sheet providing by the organization.

For more information on the organization and facts regarding cervical and gynecological cancer, visit Astateofteal.org.